Protesters vow to keep up pressure on French island Mayotte

The French government was facing fresh protests Wednesday on the French Indian Ocean island of Mayotte, after citizen groups dismissed talks on efforts to improve living standards and security problems as insufficient.

Mayotte, an island of 250,000 people that is part of the Comoros archipelago off southeast Africa, has been in turmoil since mid-February.

Violent clashes between rival gangs at a school sparked anger over spiralling crime which many residents blame on migrants from non-French Comoran islands.

Five hours of negotiations late on Tuesday between protest leaders and France’s minister for overseas territories, Annick Girardin, had raised hopes that breakthrough was in sight.

But protest leaders at a rally Wednesday in the main town of Mamoudzou felt “betrayed” by Girardin’s suggestion that an accord had been reached before they had consulted with demonstrators, said spokesman Said Hachim.

Organisers vowed to maintain the roadblocks that have paralysed the island, but said they were willing to hold new talks with a government delegation, following Girardin’s return to Paris. 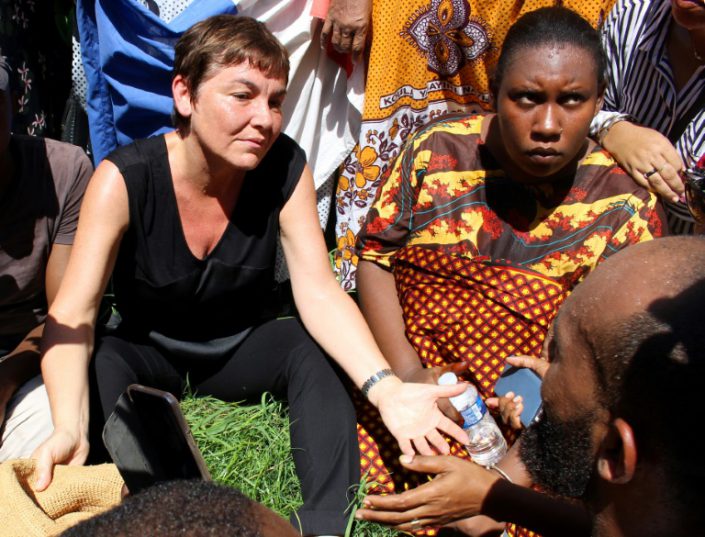 The island, which voted to become an integral part of France in 2009, has been plagued by strikes, demonstrations and roadblocks aimed at drawing the attention of the government in Paris to the situation.

Per capita economic output on the island is a quarter of that on the French mainland and the unemployment rate of 25.9 percent is over double that in France as a whole.

Ahead of her visit, Girardin promised to tackle the phenomenon of pregnant women arriving by boat from nearby islands to give birth on French soil, as a way of obtaining French and EU citizenship for their child.

Around 70 percent of the 10,000 babies born every year in the maternity hospital in Mamoudzou are born to illegal migrants, mainly from the nearby Comoran islands of Anjouan, Moheli and Grande Comore, according to official statistics.

Girardin has suggested giving the hospital special “extra-territorial” status so that children born there do not automatically qualify for citizenship by birth.

The Comoros, one of the world’s poorest countries, was a French colony until 1975 when it declared independence.

But Mayotte opted to remain part of France. In March 2011 it became the 101st French department, or administrative area, in accordance with a referendum two years earlier.

The islands’ population, who are mostly Muslim, have full French voting and citizenship rights. They have a representative in the National Assembly in Paris, 8,000 kilometres away (5,000 miles), and two in the Senate.

Mayotte is not the only French overseas department that has become a magnet for migrants while itself trying to play catch-up with mainland France on health, housing and education.

French Guiana, situated between Brazil and Suriname in South America, has experienced a surge of arrivals from Haiti and neighbouring countries in recent years that has also put pressure on under-resourced hospitals and schools.

That led to months-long protests ahead of France’s presidential election last year, which prompted promises of extra security forces and funding.