Protests over illegal immigration gripping the French island of Mayotte off Africa's coast have an unexpected epicentre: a maternity ward packed to bursting point.

The main hospital in Mayotte, wedged between Madagascar and the southeast African mainland, is now home to the busiest maternity ward in France — mostly serving migrant mothers.

So great is the influx of mothers from the neighbouring Comoros islands — which are much poorer and not part of France — that the government is now considering the drastic step of declaring the hospital as non-French territory.

Hadidja, one of the few Comoran mothers willing to speak to journalists, admitted with some embarrassment that she is here because she wants her children “to be French”.

Like thousands of others, she arrived on the island of 250,000 people last year after enduring a 17-hour crossing in a traditional kwassa-kwassa fishing boat from the Comoros island of Anjouan, 70 kilometres (43 miles) away.

She has just given birth to a boy, Hassan, in the bulging maternity ward in Mayotte’s main town of Mamoudzou after a difficult birth for her first child.

“It went badly, I suffered a lot of pain,” she said in hesitant French, sitting up in bed.

“I came here because it’s a good hospital.”

The flow of migration from the Comoros — which unlike its neighbour voted for independence from France in 1974 — has been going on for years and is difficult to measure.

Some 9,600 babies were delivered in the Mayotte maternity wing last year, a record for any hospital in France.

In a phenomenon echoing complaints of foreign mothers travelling to the US to give birth to children with US citizenship, some 70 percent of the mothers were undocumented immigrants, according to French national statistics agency INSEE. 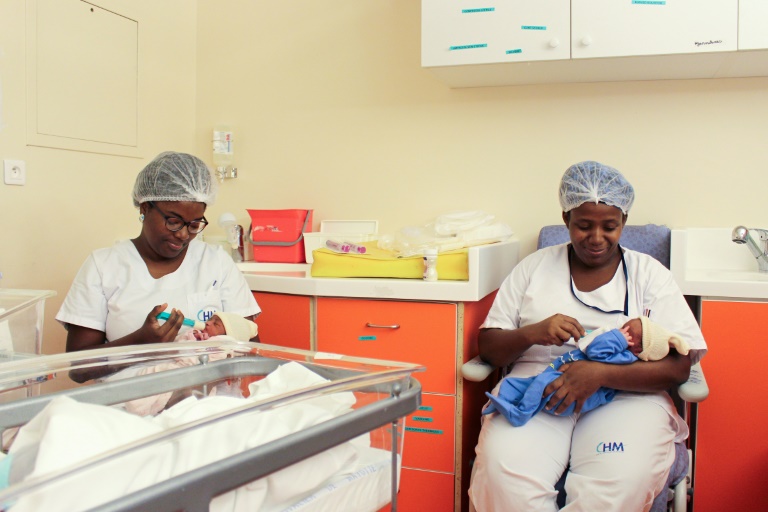 Protests over illegal immigration gripping the French island of Mayotte off Africa’s coast have an unexpected epicentre: a maternity ward packed to bursting point

“There are too many births, too many babies, too much work,” said trainee nurse Moina Baco.

“I’ve got a baby that doesn’t even have a crib anymore. There aren’t any left.”

Chief midwife Moendandze Zadibo said the hospital was so short on space that women are being transferred to other facilities just hours after giving birth if they are were doing well, to free up their beds for more arrivals.

And the thinly-stretched staff are having to deal with more complex births due to the poverty of the women arriving.

“We have more emergency caesareans, more women who arrive without ever having seen a doctor during their pregnancy,” she said.

The dire situation at the maternity ward, along with growing lawlessness that locals blame on the migrants, has fed the roadblocks, strikes and protests that have paralysed Mayotte for a month.

Local mother Mariama, 33, gave birth the day before to a little girl.

She is set to be kicked out of the hospital because she has social security, which means she has access to a private-sector midwife.

“We’ll have to sort ourselves out, while those who don’t have social security will stay,” she said.

“I feel like I’m second class — when I pay my contributions, I pay my taxes.”

The issue comes up frequently among the protesters who have been manning the street barricades in a bid to get the government 8,000 kilometres away in Paris to do something. Protesters gathered in Mamoutzou, on the French Indian Ocean island of Mayotte, March 13, 2018, against insecurity and immigration. The French government is trying to end weeks of unrest with promises of action against the influx from neighbouring African islands that has strained public services

Midwives have a difficult time getting past the barricades “because we are treated like traitors for helping foreign children give birth here”, one of them told AFP.

But medical professionals say they have a duty of care to anyone who turns up.

“We are a public hospital and we look after mums. We don’t ask where they’re from,” said the hospital’s director Catherine Barbezieux.

Medics oppose the idea of declaring the hospital to be a no man’s land, saying it would not stop mothers from coming to Mayotte.

“The medical community can only express the strongest reservations” about the idea, said Philippe Durasnel, vice-president of the hospital’s medical commission.

“Given that women are coming so that their children can have French nationality, they will simply give birth at home or in the bush. We’d be opening the door to potential tragedies.”