Mozambique elite police on trial for murder of poll observer 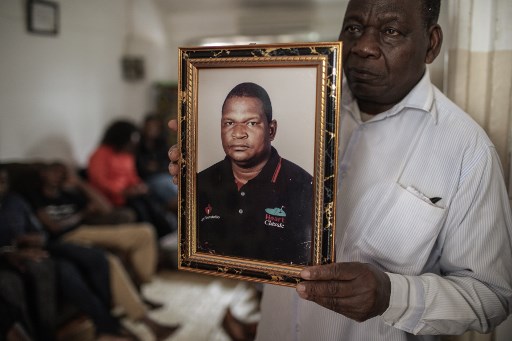 In this file photo taken on October 11, 2019 Filipe Mahajane, spokesperson for the Matavele family, holds a portrait of murdered Executive Director of the Non Governmental Organisation in Gaza province (FONGA) Anastacio Matavele at Xai-Xai in the Gaza Province, Mozambique. Picture: GIANLUIGI GUERCIA / AFP

Six members of Mozambique’s elite police unit have gone on trial for the murder of a prominent election observer in a case that has gripped the southern African nation.

Over the past week, half a dozen elite police officers have testified in court in the southern province of Gaza, four of whom have confessed to taking part in a plot to murder him.

The trial is unprecedented in a country where murders and abductions of members of civil society, opposition politicians and journalists have become routine since 2015 yet are typically sidelined for lack of evidence.

One of the alleged trigger men, policeman Martins Wiliamo, died in the smash along with a second suspect, and a third was arrested.

Two other policemen were arrested a few weeks later, as well as a teacher who owned the vehicle used for the crime.

Two of the officers have confessed their involvement but have fingered fellow policeman Agapito Matavele as the ringleader.

Matavele, who has the same family name as the victim but was not related to him, is on the run.

Extraordinary details have emerged of a Mob-style hit that left the victim’s car riddled with 13 bullet holes.

“I drove the car alongside the victim’s car and the order to fire came from the back seat,” Assistant Inspector Edson Silica, 34, the driver on the day of the murder, told the court.

“Agapito and Martins Wiliamo lowered the windows and started shooting at point-blank range.”

Silica, a police officer for 13 years, said Agapito Matavele knew the details of the mission.

As for himself, he maintained that he was only told minutes before the crime that they were going to “assault an old man with a lot of money”.

Officer Euclidio Mapulasse, who was later arrested, said he had been on the back seat, sitting between the alleged shooters.

“I was in the middle seat. There was no way I could open fire,” Mapulasse said.

“The ones who opened fire were Agapito and Martins Wiliamo.”

The remaining defendants deny any involvement.

The assassination sparked an outcry, for it occurred in the run-up to crucial elections troubled by violence and accusations of fraud.

Just months earlier, President Filipe Nyusi and the opposition Renamo party signed a truce aimed at halting fighting that had flared 27 years after a civil war that killed an estimated million people.

The Election Commission awarded victory to Nyusi and his Frelimo party, which has been in power since independence from Portugal in 1975.

In the coming days, relatives of the deceased election observer and the two agents who died in the accident will testify.

But why was the murder carried out? And did the order go higher up the chain of command?

The prosecutors say they have no evidence for suggesting other than that the accused “acted on their own initiative.”

One of those arrested, Tudelo Guirugo, 46, initially told prosecutors that he selected members of the hit squad on the orders of the elite unit’s boss, Alfred Macuacua.

But he changed this account in court, saying Macuacua was not involved. “I was desperate — I thought I could get out of it by implicating him.”

Adriano Nuvunga, head of an NGO called the Centre for Democracy and Development, said the killing was “in actual fact a state crime.”

“The ones who are implicated are police officers in positions of responsibility,” Nuvunga said.

Relatives of the deceased election observer and of the two agents who died in the accident are scheduled to testify in the coming days.