Seen as a beacon of hope and stability in a turbulent region, Ghana is a major producer and exporter of gold, cocoa and oil. 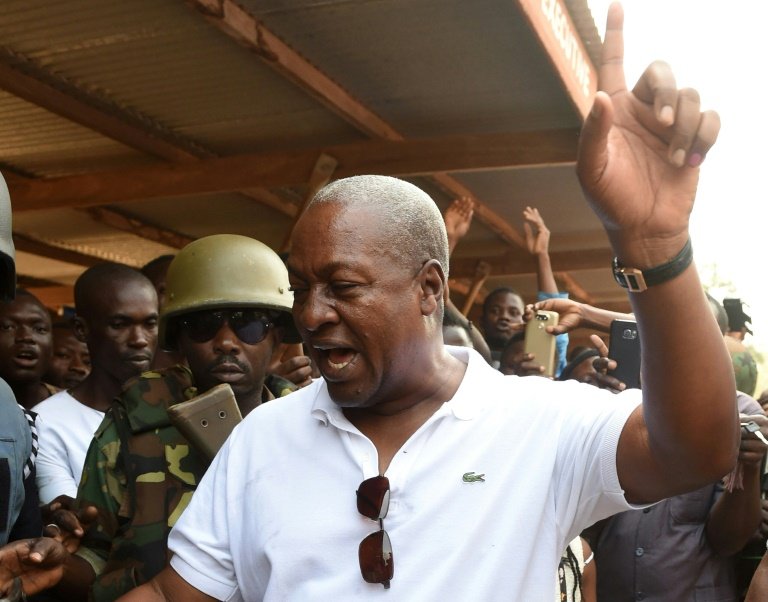 John Mahama, seen in 2016, was Ghana president from 2012 to 2016, when he lost a re-election bid to President Nana Akufo-Addo of the New Patriotic Party (NPP) over a faltering economy and corruption allegations. AFP/File/PIUS UTOMI EKPEI

It is also the world’s second biggest producer of cocoa after Ivory Coast, with more than a fifth of the market. It also exports oil, diamonds, bauxite and manganese.

Once hailed as a regional growth model, it was forced to turn to the International Monetary Fund (IMF) in 2015 for a bailout as global commodity prices tanked.

Growth for 2020 is expected to fall to its lowest in 30 years, to 0.9 percent according to the International Monetary Fund, a steep decline from 6.5 percent growth in 2019.

After Nkrumah, the most influential of the former British colony’s leaders has been Jerry Rawlings, who came to power as an air force captain in 1979.

Although he mounted a second coup in 1981 after allowing elections, Rawlings — who died on November 12 — brought in a constitution that has proved a stable basis for democratic rule.

The World Bank has hailed it for taking “major strides toward democracy under a multi-party system, with its independent judiciary winning public trust.”

In 2019, Ghana cracked down on separatists who were preparing to declare their own nation, “Western Togoland”, in the eastern Volta region bordering Togo.

Modern-day Ghana is home to the Ashanti people, a nation and ethnic group which has wielded power in the region for over 300 years.

Ashanti monarchs still preside over an area containing around five million people that is roughly the size of Great Britain.

Ghana has played an important role in mediating in wars and crises that have affected its neighbours.

The late Kofi Annan, a Ghanaian, was the first black African to lead the United Nations and won the Nobel Peace Prize for his nine-year tenure that ended in 2006.

Barack Obama chose Ghana for his first visit to sub-Saharan Africa in 2009 after his election as US president.

Cape Coast, the former European colonial capital, was once the largest slave-trading centre in West Africa from where slaves were shipped to North and South America and the Caribbean.

Now a fishing village, it has become a major tourist attraction since Obama visited with his family.

Akufo-Addo designated 2019 the “Year of Return” to commemorate the 400th anniversary of the first recorded landing of a ship carrying Africans to the US and to encourage their descendants to “come home”.