The 38-year-old former ragga singer turned politician has been the main rival to Uganda's veteran leader who has been in power since 1986 and is seeking a sixth term in office. 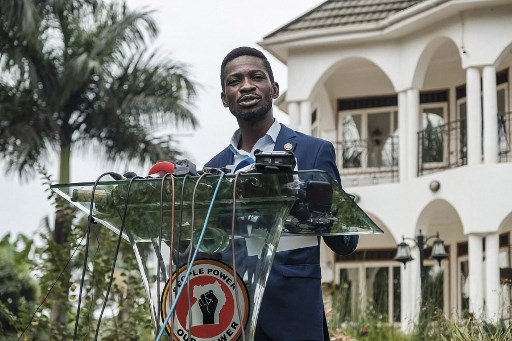 The 38-year-old former ragga singer said his party’s polling agents were beaten and chased away in parts of northern and western Uganda, that ballot boxes were opened and stuffed, and that some voters were only given ballots for the parliamentary election.

Museveni, 76, is seeking a sixth term after almost four decades in power, and the youthful Wine has emerged his main rival in a country where most have known only one president.

The internet remained down for a third day as vote counting continued from Thursday’s poll, with provisional results from 29 percent of polling stations giving Museveni an early lead of 63.9 percent while Wine trailed with 28 percent.

“I am very confident that we defeated the dictator by far. I call upon all Ugandans to reject the blackmail. We have certainly won the election and we’ve won it by far,” Wine told journalists.

“Whatever is being declared is a complete sham we reject it and we dissociate ourselves with it.”

Wine, whose real name is Robert Kyagulanyi, listed a host of irregularities in different districts and promised to provide video evidence once the internet was restored.

He said he would announce a strategy in coming hours

Election commission chairman Justice Simon Mugenyi Byabakama said he did “not appreciate the assertion that these results we are reading out are rigged”.

“The onus is on candidate Kyagulanyi to show how votes are rigged.”

On Friday morning the capital Kampala was quiet and some businesses remained closed, while soldiers and police patrolled on foot.

Museveni faced a total of 10 candidates, but it is the popularity of the former popstar Wine, who grew up in a slum and is nicknamed the “ghetto president”, that has rattled the former rebel leader.

The poll followed one of the most violent campaigns in years, with harassment and arrests of the opposition, attacks on the media and scores of deaths.

However Byabakama said the vote had gone off in a “peaceful and tranquil manner”.

Police spokesman Fred Enanga said there had been “no major cases of violence reported”.

A senior foreign diplomat told AFP there had been sporadic incidents of violence and many irregularities but no sign of mass manipulation.

The US, EU, UN and global rights and democracy groups have raised concerns about the integrity and transparency of the election.

Only one foreign organisation, the African Union (AU), has sent monitors, along with an AU women’s group.

The United States, a major aid donor to Uganda, cancelled a diplomatic observer mission after too many of its staff were denied permission to monitor the election.

Wine has vowed non-violent street protests should Ugandans feel the election was stolen.

Museveni has warned that using violence to protest the result would amount to “treason”.

He has ruled Uganda without pause since seizing control in 1986, when he helped to end years of tyranny under Idi Amin and Milton Obote.

Once hailed for his commitment to good governance, the former rebel leader has crushed any opposition and tweaked the constitution to allow himself to run again and again.

And for many in the country, where the median age is 16, Museveni’s glory days are no longer relevant or sufficient.

But Museveni, one of Africa’s longest serving leaders, has never lost an election and observers expect this time around will be no different.

His opponents — most visibly Wine, who spent much of the campaign in a bulletproof vest and combat helmet — were arrested, blocked from rallying and dispersed with tear gas throughout the campaign.

Two days of protests in November led to the deaths of 54 people.

WATCH: Ramaphosa previews the ANC’s LGE manifesto ahead of official launch
1 day ago
1 day ago

Don't get angry, make a cross
3 days ago
3 days ago

WATCH: Ramaphosa previews the ANC’s LGE manifesto ahead of official launch
1 day ago
1 day ago

Don't get angry, make a cross
3 days ago
3 days ago