A partially torched military tank was seen abandoned on the roadside. Elsewhere stood a torched stack of rusty cargo containers. 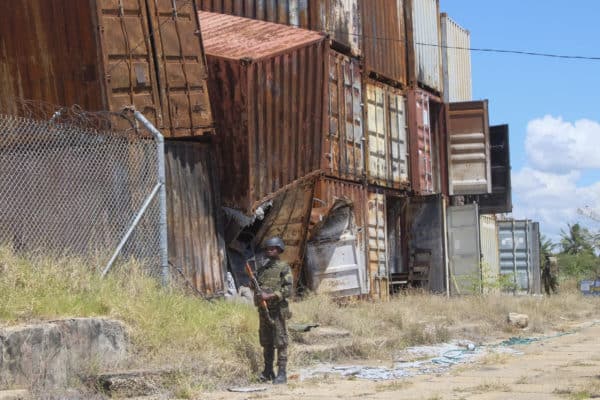 A Rwandan soldier patrols in Mocimboa da Praia, northern Mozambique, on August 12, 2021. - Apart from a few soldiers on patrol, the streets are deserted and there is not a sound: Mocimboa, a strategic port in the north of Mozambique occupied until recently by armed jihadist groups, is a ghost town, between wild grass and ruined buildings. Some of the houses used by the jihadists -- who have been sowing terror in the north of the country for more than three years and took the town just a year ago -- are preceded by signs in Swahili: "Do not enter" or even "Do not destroy". (Photo by Emidio JOZINE / AFP)

Except for dozens of soldiers on patrol, Mocimboa da Praia, occupied by jihadists until just a few days ago, is a ghost town of abandoned and burnt-out buildings.

A few houses remain intact in the Mozambican port city, bearing signs that they were recently inhabited by the extremist militants. Some have Swahili inscriptions for “do not enter” or “do not destroy” on the doors.

Rwandan and Mozambican soldiers have been on patrol since they forced out the militants last weekend, an AFP correspondent embedded with the military from the East African country, said.

The two armies announced on Sunday they had driven out jihadists who had been occupying the strategic city for the past year.

A Rwandan army commander, who only gave his name as Frank, said the insurgents left after four consecutive days of fighting.

“The enemy was trying to attack us since his centre of gravity was under fire, (but) at the end we managed to (oust) him,” said the officer, speaking in English.

The city lies around 60 kilometres (37 miles) south of Palma, the hub of a $20-billion gas exploration project.

It was overrun by the jihadists in August 2020 — a watershed moment in their bloody campaign.

Mocimboa da Praia was where an obscure group, locally referred to as Al-Shabab, first launched its attacks October 2017.

With its occupation, the town became the de-facto headquarters of the group, which in 2018 declared its affiliation with the so-called Islamic State.

The group’s campaign, focussing especially on remote villages, has killed at least 3,100 people and uprooted more than 800,000 from their homes.

At the end of March, after a brazen attack on the coastal town Palma, the IS released a video said to have been shot in Mocimboa da Praia, showing more than 100 mostly young armed men, wearing fatigues and civilian shirts, with red bandanas tied around their heads.

Government forces had struggled to regain control of the city until Rwanda sent in 1,000 troops — the first foreign country to deploy forces in Mozambique’s fight against the extremists.

Mozambican army commander Cristovao Chume said there had been little resistance from the insurgents during the raid, with no deaths reported.

But the troops recovered an arsenal of abandoned weapons, including assault rifles and rocket-propelled grenades.

A partially torched military tank was seen abandoned on the roadside. Elsewhere stood a torched stack of rusty cargo containers.

There is no water or electricity. The provincial government is starting to plan for the return of the population, who previously numbered around 120,000.

“We have to organise a way forward for the people of Mocimboa da Praia to return,” Valige Tauabo, governor of Cabo Delgado province, said during a visit to the town on Thursday.

– ‘Insurgents can blend with locals’ –

However, analysts consider it too early to even contemplate a return.

“It is very risky to allow the population to return at this time because it will be difficult to distinguish the population from the insurgents,” said Enio Chingotuane, a peace and security expert at the Center for Strategic and International Studies in Maputo.

The insurgents “can easily blend in with the population as normal people and then create instability,” he said.

According to Joao Feijo, a researcher with the Observatory of the Rural Environment (OMR) who studies the insurgency, the jihadists may have retreated strategically and could be lurking close by.

“They may have dispersed and then blended with the population or be in trenches,” he suggested.