Concern over the ongoing political and security situation in Guinea and plea for AU's intervention. 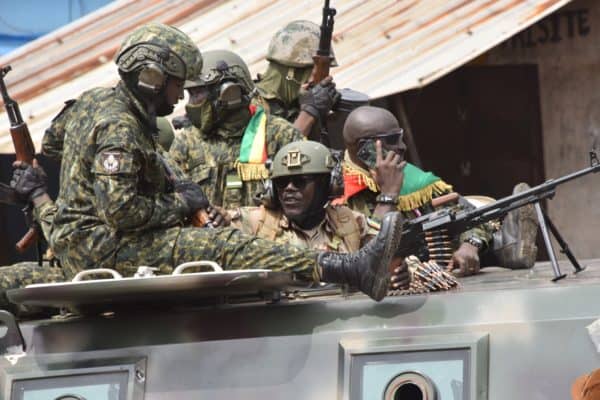 Members of Guinea's armed forces celebrate after the arrest of Guinea's president, Alpha Conde, in a coup d'etat in Conakry on Sunday. Picture: AFP

The South African government on Monday called for the immediate release of Guinea President Alpha Condé after the army seized power in a coup on Sunday.

The West African state was hit by fresh turmoil when special forces arrested the 83-year-old leader and declared they were scrapping the constitution and imposed a curfew.

In a statement, the department of international relations and cooperation (Dirco) said it noted with great concern the ongoing political and security situation in Guinea and called on for the African Union’s (AU’s) intervention.

“We call for the immediate release of Prof Alpha Condé, President of the Republic of Guinea unharmed and the AU to actively intervene to ensure a speedy return to stability,” said Dirco spokesperson Clayson Monyela.

Monyela said the South African government furthered called on the military to exercise total restraint and refrain from political interference in Guinea.

“In addition, South Africa urges all political actors and civil society to engage in meaningful dialogue in order to resolve the current political challenges facing the country.”

Guinea’s coup leader, seeking to reassure mining investors a day after the military seized power, promised on Monday that the country would honour its business commitments.

A committee set up by the junta assures “economic and financial partners that activities in the country are continuing as normal”, Lieutenant-Colonel Mamady Doumbouya said in a speech.

“The committee assures partners that it will respect all its undertakings,” he said.

Guinea’s 13 million people are among the poorest in the world even though their country is a treasure trove of minerals from bauxite and iron ore to gold and diamonds.

It has rarely known stability since declaring independence from France in 1958 and bloody repression is entrenched.

Condé was accused of following that same path towards authoritarianism in the final years of his rule.

Dozens of people were killed during demonstrations against his bid for a third term and hundreds more were arrested.

He was proclaimed president last year after elections that his main challenger Cellou Dalein Diallo and other opposition figures denounced as a sham.

The latest turbulence erupted on Sunday morning, when gunfire broke out in the centre of Conakry. For several hours, the situation was unclear, as the government said an attack on the presidential palace had been “repulsed”.

There has been no official account of any casualties and there was no report of any major incident during the night.

The end of Conde’s regime triggered jubilation in some parts of Conakry, especially in pro-opposition districts.

Conakry, usually a bustling city, awoke in calm on Monday. Many shops were closed, and the main market of Medina was exceptionally quiet.