Tigray has faced near-daily aerial bombardments since last week as the military steps up its use of air power in the war. 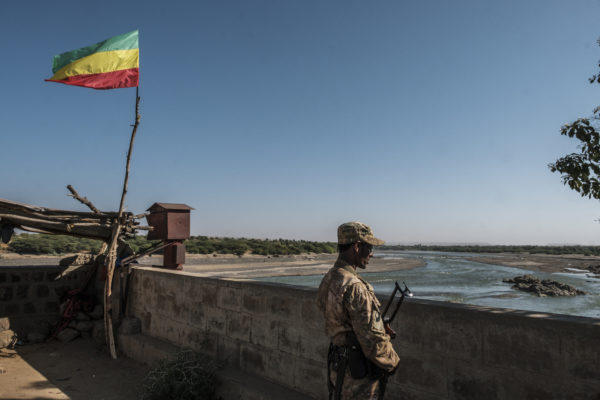 A member of the Amhara Special Forces watches on at the border crossing with Eritrea where an outdated Ethiopian flag waves, in Humera, Ethiopia. - A year ago, as much of the world awaited the results of the US presidential election, Prime Minister Abiy Ahmed deployed troops in Ethiopia's Tigray region. (Photo by EDUARDO SOTERAS / AFP)

Ethiopian forces retreated from Dessie, a strategic town in the Amhara region that borders Tigray, residents told AFP on Saturday following heavy fighting and power outages in the city.

If confirmed, the fall of the town to the Tigray People’s Liberation Front (TPLF) would be a major blow to the federal government, which has been embroiled in a nearly year-long war with the rebels.

“At around 2 am Ethiopian soldiers began retreating from the area,” said Amir, a Dessie resident who declined to give his second name.

TPLF fighters “entered the city, with ENDF (Ethiopian National Defence Force) soldiers not seen,” said another resident who gave his name only as Mohammed.

“I don’t know if the soldiers left or were captured,” he told AFP, adding that he was trying to flee Dessie for the town of Kombolcha, located further south.

There was no immediate comment from the TPLF or the government on the situation in Dessie.

Dessie, which is located in the Amhara region neighbouring Tigray, lies about 400 kilometres (250 miles) north of the Ethiopian capital Addis Ababa.

Tigray meanwhile has faced near-daily aerial bombardments since last week as the military steps up its use of air power in the war.

According to a hospital official, 10 people died in an air strike on Thursday, while the UN said two strikes on the Tigrayan capital Mekele on October 18 killed three children. Another person died in a separate attack this month.

The government said the facilities bombed in northern and western Tigray were military in nature and aiding the TPLF.

The bombings have drawn international censure, and disrupted UN access to the region where an estimated 400,000 people face famine-like conditions under a de-facto aid blockade.

Control of the skies, along with superior manpower, is one of the few remaining areas where the federal government holds a military advantage over the rebels.

The conflict erupted last November when Prime Minister Abiy Ahmed deployed troops in Tigray, with the operation spiralling into a prolonged war marked by massacres, mass rapes and a humanitarian crisis.

The prime minister, who won the Nobel Peace Prize in 2019, said the operation was in response to attacks on army camps by the TPLF, the regional ruling party which dominated national politics for three decades before Abiy took office.

He vowed a swift victory, but by late June the rebels had regrouped and retaken most of Tigray, including Mekele, and fighting spread to the neighbouring regions of Amhara and Afar.