The president’s bumbling, meandering performance was symptomatic of his administration’s plight. 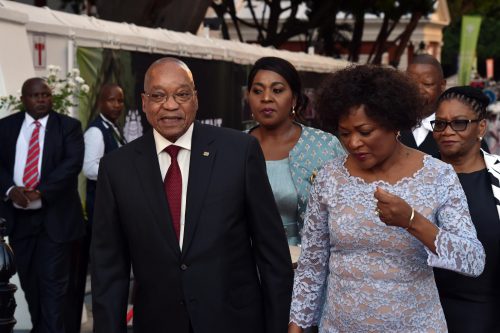 President Jacob Zuma delivering his State of the Nation Address in the joint sitting of the house in Parliament, Cape Town, 11/02/2016, Elmond | GCIS

Stutter. Fumble. Twitch. Smirk. Cough. Giggle. Scratch. It was yet another desultory performance, long on rhetoric but short on substance, by President Jacob Zuma in his 10th State of the Nation address (Sona).

This annual pilgrimage has become Zuma’s personal Via Dolorosa, threading its way along a massive security cordon, ribboned with razor wire. It ended, as always, with his ritual crucifixion at the hands of the opposition parties. It’s a spectacle of pomposity and paranoia. It’s fashion frippery, preening against a backdrop of armoured cars.

This year, the ANC’s fear of the people ratcheted up a notch, with the unconstitutional deployment outside the legislature of hundreds of armed soldiers in combat fatigues.

On one of the most important, solemn events of the political calendar, TV viewers could, on the state broadcaster, flip between fawning coverage on one channel and The Bold and the Beautiful on the next. The comic content meant Sona edged out the soapie on entertainment value, but the intelligence quotient of the latter was appreciably higher.

The same script endlessly repeated must inevitably induce ennui. The self-conscious dramatics of the EFF are now tiresomely predictable and pointless.

Even the ritualistic fisticuffs of the closing EFF scene, where their MPs are forcibly bundled out, had a Hollywood unreality to it.

The DA fared better with their act of showmanship – a request for 30 seconds of silence for the 94 Esidimeni victims – but then again, they did have in their favour the fact that Speaker Baleka Mbete is emotionally tone deaf. Instead of enthusiastically acquiescing and thus defusing any political advantage that might accrue to the DA by associating the ANC with appropriate remorse over this tragedy, she refused.

Every iteration of Sona has its Keystone Cops moment. This time, the parliamentary security officers distinguished themselves by pepper-spraying the public gallery.

At the end of the day Sona has, for South Africans, become more of an impromptu instruction in the fine distinctions between a point of order and a point of privilege, rather than what it was intended to do.

The president’s bumbling, meandering performance was symptomatic of his administration’s plight. The country is rudderless; its government is corrupt and incompetent. Until Zuma is replaced with a new leader, there is nothing much that the ANC can do but repackage old platitudes, recycle cliched mantras.

Just as there was little from the past year of which to boast, the ambitions for 2017 were similarly threadbare. This year’s Sona was crafted around the promise of “radical economic transformation”, but there was nothing substantively new in the “new chapter” unveiled by Zuma.

The Sona fringe theatre was equally lacklustre. To make up for the brickbats and antipathy that they knew Zuma would encounter in parliament, the ANC had bussed in supporters to its own so-called People’s Assembly.

But the event drew only a fraction of the 30 000 people predicted. And it was not the president’s populist promises that drew the applause, but his rollicking rendition of his signature tune, Umshini wami (Bring Me My Machinegun).

Given the fluency and verve of his singing, perhaps Zuma should contemplate turning next year’s Sona into a musical. It might be the only way to rescue a hitherto pathetic performance.