The confusion at the heart of Rachel Dolezal, the ‘black white woman’

She now claims to be a 'transracialist', using an argument that contradicts itself. Rachel Dolezal, the former branch president of the National Association for the Advancement of Colored People (NAACP) who gained global notoriety in 2015 after being “outed” as a white woman pretending to be black, is back with a new book on race. Dolezal, who is ethnically German, now claims that she is “transracial”, a condition she compares to transgenderism. By this she means that although she was born white, she identifies with being black, arguing that race is a social construct.

Dolezal complains of further victimisation because “transracialism” is not recognised in the same way as transgenderism. And Dolezal sees herself as triply stigmatised; because of her race, because of her trans status and also because of the perceived illegitimacy of this status.

For someone like me, concerned both with race and with the role of narrative in culture, the narrative spun by Dolezal is both confounding and uniquely fascinating. In an interview with BBC Newsnight, she announced – not incorrectly, in my view – that “race is a lie”. At the same time, she laid claim to the transracialism that she demands to be accepted as a truth.

But while Dolezal has been roundly – to borrow from the old slave spiritual – rebuked and scorned by many, her claim deserves to be considered seriously. Is there really such a thing as transracialism, or is Dolezal correct in her simultaneous – if contradictory – assertion that “race is a lie”? Because in a binary universe, the two statements cannot both be true.

I’d like to tell you a story. I found it in a book of folklore collected from real folk in the American Deep South at around the turn of the last century. The story is about a black girl who is magically transformed into a white girl. While she’s the white girl she lives a charmed life, like Cinderella at the ball. But when she becomes a black girl again, she not only loses all her privileges but worse, is accused of having murdered the now-vanished white girl, and is sentenced to hang.

Now, I won’t tell you the whole story. But “passing” – when a person with mixed African and European ancestry is sufficiently light-skinned to “pass” for a white person – has a long history in the United States. This was no small matter, since during slavery, those who “passed” successfully may have been able to escape and remain undetected, living free within the white community.

Of course, this meant that, unlike the black girl in the story, any person who “passed” would need to have a substantial amount of European ancestry. Dolezal, who cosmetically modifies her skin tone and hair texture to assume some characteristics associated with African descent, appears to all intents and purposes as a person of mixed European and African ancestry.

Patti Smith’s 1978 track, Rock ‘n’ Roll Nigger, plays with the construction of black identity, arguing in her song for a positive re-appropriation of blackness and that “nigger” applies to anyone excluded from mainstream society: “Jimi Hendrix was a nigger, Jesus Christ and Grandma too, Jackson Pollock was a nigger, nigger, nigger, nigger.” The idea that identities are constructed and performed has gained credence in recent decades, not least associated with the academic Judith Butler’s ideas around “performativity” – the idea that gender roles, in particular, are largely performed as a result of acculturation and expectation rather than representing innate characteristics.

But racial identities – and race as we understand it – were constructed in support of a political caste system in a way that gendered identities were largely not, and are wholly bound up in recent legacies of slavery and colonialism.

Blanket categories of “black” and “white” are an entirely modern phenomenon. In the 17th and 18th centuries, those Europeans who were actively involved in the slave trade made a point of distinguishing between different African ethnic groups; some were considered to be better house slaves, others better field slaves. The Igbo people, for instance, were considered prone to suicidal ideation, which posed problems for the incipient slaver. In the early days of “race” as we know it, there really was no sense of the generic catch-all blackness to which Dolezal lays claim.

As generations passed, ideas of “black” and “white” were further complicated by the complex striations of racial coding that were implemented both during and after slavery, across the Americas, as a consequence of voluntary and involuntary coupling between Europeans and Africans. 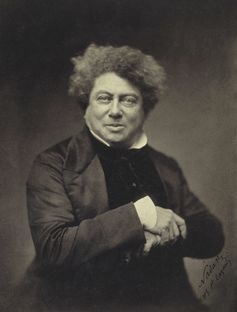 Alexandre Dumas, author of the Three Musketeers, had a grandmother who was an African slave. Picture: Google Cultural Institute/Wikipedia

This led to a dizzying taxonomy of racial mixes, including (but not confined to) so-called mulattoes, quadroons, octoroons, tercerons, quintroons and beyond, depending on how many generations back a person’s African ancestry was traced. A person might be able to pass as white if their direct African ancestry was three or four generations removed – although if their relative “blackness” was discovered, it was a source not only of shame but was a precondition of legal slavery. The reason why any of this is important is because we must recognise that the history of race is two things. It’s both a fallacy, created in support of a master-slave caste system; and it’s a complex taxonomy based on continental and ethnic inheritance.

At no level beyond metaphor is it an identity that can be selected, because the whole point of any caste system is to create fixed separations of power that cannot be changed or chosen. If they could, then everyone would choose to belong to the privileged caste – which would render the whole caste system meaningless. At the same time, inheritance is not an accident of birth. It is not a Y chromosome rather than an X, but based on real people in one’s familial line and whose histories cannot be erased retroactively.

Dolezal’s problem is this: to choose one’s racial identity irrespective of inheritance is tantamount to an admission that race does not exist. It would be one thing to adopt a black identity as a show of political resistance and solidarity, but Dolezal is instead in danger of laying claim to what is arguably a racist fantasy of “blackness”. If we fail to take her seriously, we run the risk both of ignoring the critical issues at stake and, worse, accepting uncritically Dolezal’s repurposing of racial ideology. If we are to accept that there is any such thing as “transracial” then it should be as an opportunity for all of us to transcend the politically expedient but specious categories of race.

Instead, by claiming race as some kind of mysterious inner state divorced either from its political, historical or ethnic specificity, Dolezal could do the opposite of transcending race; rather, she runs the risk of reinforcing racial and racist models by insisting that race is an innate, inner experience rather than something imposed from without.

If Dolezal is genuine in her claim that “race is a lie”, then she must recognise that her claims to transracialism are also lies. She simply cannot have it both ways; because race either is, or it isn’t.