Why Molefe’s return to Eskom can’t be justified

Molefe left the power utility after a public protector’s inquiry alleged that he may have been involved in nefarious activities. 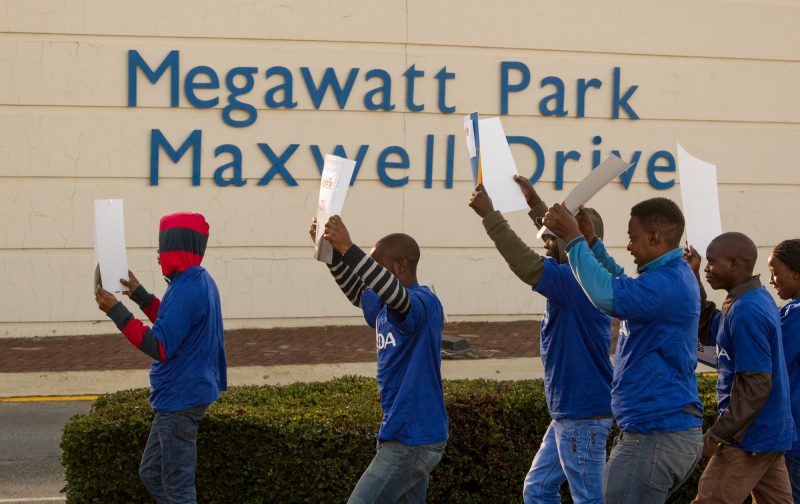 Protestors from the DA march past and carry placards Megawatt Park in Sunninghill, Johannesburg. Members of the DA, COPE and some private citizens protested the reinstatement of Brian Molefe as CEO of Eskom, who resigned under a cloud of suspicion earlier this year. 15 May 2017. Picture: Yeshiel Panchia

The return of Brian Molefe as CEO of South Africa’s largest state owned enterprise, the power utility Eskom, has caused outrage due to the circumstances under which he resigned in December last year.

Molefe left the power utility after a Public Protector’s inquiry alleged that he may have been involved in nefarious activities. The State of Capture report by the then Public Protector, Thuli Madonsela, showed extensive and irregular communication between Molefe and the Guptas, a family with close ties to President Jacob Zuma.

At the time Molefe’s backers – including board chairperson Ben Ngubane – glorified him. They attributed a turnaround in Eskom’s fortunes as a function of the CEO’s 18-month tenure. His supporters branded him as a messiah whose departure would have negative consequences for the power utility.

Similar sentiments were expressed more recently by Ngubane and Public Enterprises Minister Lynne Brown. She told a press conference that she supported his return as CEO as he was responsible for the fact that load shedding (organised power cuts) had stopped and the power utility was on sound financial footing.

But was Molefe’s performance as great as his supporters say it was? I suggest not.

It’s true that under Molefe’s reign power cuts across the country were brought to an end. In addition, Eskom reported better financial results last year.

But neither of these two developments had much to do with Molefe’s capabilities as a CEO. The power cuts ended primarily due to a decline in electricity demand – partly the consequence of a weakening economy – and new generation capacity that had been in the pipeline for years. And the improvement in a number of Eskom’s financial ratios was due in large part to massive financial support provided by the government in 2015.

Did Molefe end the power cuts?

Prior to Molefe’s arrival as CEO in March 2015 the power utility’s finances had been worsening and it was struggling to meet electricity demand. These challenges were largely due to a delay in investment by the government as well as slow increases in tariffs.

The delay in investment was due to government’s indecisiveness over a protracted period of time. And the slow increase in tariffs was the result of a desire to shield consumers from sharp increases and a mistrust of Eskom’s claimed needs.

South Africans lived through a period of extensive power cuts in 2007. Electricity generation capacity was unable to keep up with demand. The situation was largely saved by slowing economic growth combined with greater energy efficiency. These factors meant that electricity demand was already well below forecasts prior to Molefe’s appointment and continued this trajectory during his tenure as CEO.

Falling demand created a virtuous cycle in operations: lower demand put an end to the need to impose power cuts. It also opened up the opportunity to do maintenance on infrastructure, leading to greater availability of capacity and an even lower probability of power cuts.

To be sure, Molefe still had to ensure that Eskom continued to get the basics right. There’s little evidence that he did more than that. Instead, it seems that his predecessor, Tshediso Matona, was excessively negative in his outlook. This set up Molefe to appear as though he had pulled-off a dramatic success.

What of the improvements in Eskom’s financial situation?

The view that Molefe was behind Eskom’s short-term financial turnaround was used to award him a R2.5 million performance bonus for the year ended 31 March 2016. (Molefe appears to have secured a R30 million retirement package when he tendered his resignation. Under the terms of his return to the job this will now no longer be paid.)

But a closer look suggests that Eskom’s financial improvement can’t be attributed to Molefe. In many respects it was the result of extraordinary support afforded to the power utility by the government in 2015.

This support, facilitated by two special appropriation bills passed by Parliament, had two main components. The first was an equity injection through which the National Treasury under which Eskom received R23 billion in exchange for shares. Since government is the sole Eskom shareholder, this translated into a straight cash gift.

The second component was even more significant. This involved government writing-off a R60 billion loan which had been approved in 2008 and disbursed in multiple tranches between 2008 and 2010.

If we treat Eskom as a genuinely independent entity, the full cost to national government and therefore the taxpayer of writing off the loan had two parts:

Whether this financial support was desirable depends on your view of Eskom’s recent history. Many analysts agree that additional government support was overdue. But in relation to Molefe it raises a simpler question: if many of the improvements in Eskom’s financial ratios were due to massive transfers of cash and assets from taxpayers, did it make sense to pay its CEO a bonus that effectively also came from taxpayers?

Either way, closer analysis of Molefe’s supposed successes reveal that they are not what they have been made out to be. Combined with the failures of corporate governance with which he has been associated, the case for reappointing him as Eskom CEO appears to be paper thin.