DA and EFF are playing a dangerous game

The opposition should not allow its elation over this week’s vote to cause it to overreach. 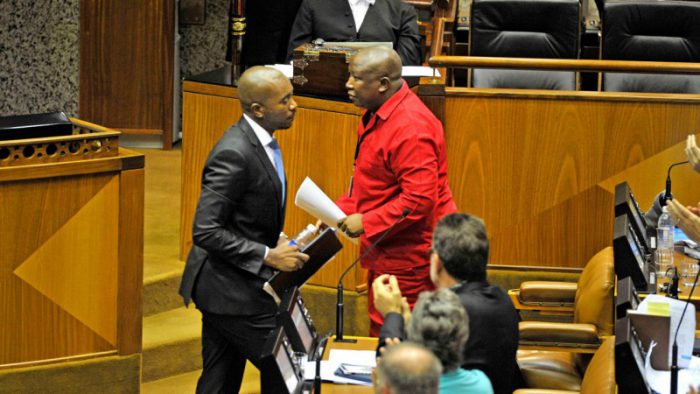 Mmusi Maimane and Julius Malema during the State of the Nation address debate. Gallo)

Politicians are adept at putting a good face on things. It’s one of their professional skills to pretend that the pig’s ear they’re clutching is actually a silk purse.

So it is hardly surprising that every party involved in this week’s failed motion of no confidence in President Jacob Zuma is trumpeting its victory.

We should be especially sceptical about ANC boasts that it has routed the satanic forces of covert regime change that masquerade as opposition parties. If this is indeed the great victory that the Zuma camp claims it to be, then the ANC needs to be wary. Any further such “triumphs” may leave it fatally depleted.

The statistics speak for themselves. The ANC, in combination with allies in a brace of smaller parties, commands almost two-thirds of the seats in the National Assembly. Yet somewhere between 30 and 40 of its 249 MPs (with some not present in the House) risked their political futures to defy a three-line whip to either vote against Zuma, or abstain.

Zuma prevailed against this latest motion by just a 21-vote margin. For the incumbent leader of a self-styled revolutionary organisation that prides itself on cadre discipline, loyalty and unity, and where the president has enormous powers of patronage, this is an enormous humiliation.

The slim margin of victory will have set alarm bells ringing. It is a warning to the Zuma-Gupta state capture axis that it is going to be more difficult than they expected to ensure their preferred candidate, Nkosazana Dlamini-Zuma, wins the party presidency.

Every bit of political chicanery and gerrymandering will now be brought to bear to neutralise the growing antipathy towards the Zupta faction before the December elective conference. It’s going to get nasty, very soon.

While the opposition parties rightly claim credit for the constitutional manoeuvrings that have left Zuma weakened and bereft of authority , the kudos are not only theirs.

It is civil society – in the form of activist organisations and a gatvol, mobilised, citizenry – which created a swell of popular opinion for a secret ballot that was impossible for the speaker to ignore. The growing disenchantment with Zuma must terrify ANC leaders.

According to an Ipsos poll released this week, if there were an election tomorrow, the ANC would not be able to achieve an outright majority. Aside from Zuma’s coterie, those who would have heaved the greatest sigh of relief about the no-confidence vote failing will have been those who brought the motion – the opposition parties.

They secretly know their best option is for the ANC to have to wear the Zuma millstone for the next 18 months, until the 2019 general election. But the game goes on.

The Democratic Alliance is now calling for parliament to be dissolved and an early election to be held because, despite winning the parliamentary confidence vote, the ANC has, in the DA’s view, manifestly lost the confidence of the electorate.

The Economic Freedom Fighters, in turn, want to impeach Zuma. The opposition should not allow its elation over this week’s vote to cause it to overreach.

A rolling campaign of the kind envisaged – designed to mire parliament in petty party politicking that has no prospect of success – may well fritter away the broad public support garnered so far.