Manana is far too juvenile for the job

He looks like the guy every mother would like for her daughter, but make no mistake, he is a wolf in sheep’s clothing. By all accounts the Deputy Minister of Higher Education Mduduzi Manana seems a perfectly decent chap judging from the front page picture in the Sunday Times (August 13).

He looks like the guy every mother would like for her daughter but make no mistake, Manana is a wolf in sheep’s clothing. His outfit in that picture costs at least R50 000.

It belies the monster he really is. Intent on still being a player, womanising, partying, and bashing women, this young man is clearly too inexperienced for his job.

Loyalty being his only qualification, he knows he can be abusive, not only because he is the son of a MEC in Mpumalanga, but because he is a Zuma loyalist.

The account of how he treats his staff, reflects someone who is insecure, exploitative, superior and downright disrespectful. Assaulting the women in the way described is cause for dismissal and criminal prosecution.

Add to that his brutal treatment of staff, it is clear he is too juvenile for a job that demands ethical and moral leadership. Problem is there are too many young men who have come through the ranks of the ANC Youth League who behave like this.

Taking their cue from their elder role models, they in turn are no example to the millions of unemployed youth in the country, exposed daily to the psychosocial ills that plague us. Consumer culture is an illness among our youth.

Many go into serious debt trying to look like Manana, sporting designer labels, wooing young women, sleeping around, when in fact they have no resources to maintain such lifestyles.

No one teaches them that values such as integrity, dignity and honour are more important than the outward symbols of success, so that behaviour such as Manana’s has become commonplace.

Outwardly, he epitomises success; inwardly he is rotten having made his way to parliament and politics through nepotism, entitlement and indolence. Whereas politics should be a career of intellectual and leadership aspirations, in the ANC it is the pathway towards easy wealth.

That is how Fikile Mbalula got there and that is what those young Gupta adherents of Black First Land First aim to achieve through cooptation and corruption. I Googled Manana’s directorships listed in the Who’s Who and they seem highly dodgy.

He seems to have amassed a fortune with directorships. News reports claim he owns a guest house and a filling station, as well as property in Ermelo, Witbank and Johannesburg.

I doubt that he knows what the key challenges of higher education are because if he did, he would not behave as violently as he does towards women.

Question is: what do our young people think when they see ministers and politicians violating the moral code?

StatsSA point to a youth bulge of highly unemployed and unemployable young people who are ready fodder for criminals and druglords.

High rates of murder, robbery, assault, domestic and sexual violence are perpetrated by young people, many of whom are repeat offenders.

It is hard to reduce crime when it is perpetrated at the highest levels of government. The culture of impunity conceived in the Union Buildings lives on through the likes of Manana. 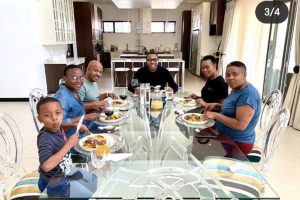