Ramaphosa should end the presidential merry-go-round

The large majority of South Africans, including members of the governing African National Congress (ANC), will be glad to see the back of Jacob Zuma as president. 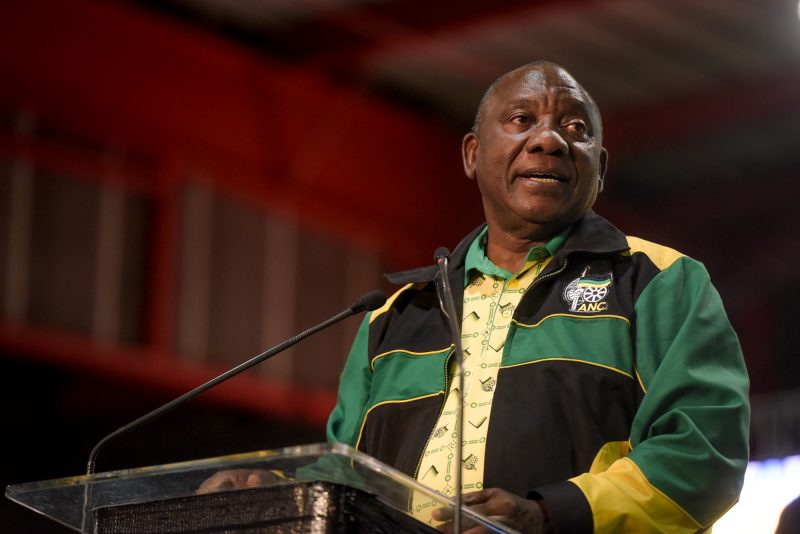 President of the ANC Cyril Ramaphosa gives a speech at the closing of the 54th National Elective Conference at Nasrec, Johannesburg, on 21 December 2017. The closing ceremony outlined broad policy approaches of the new leadership, which included expropriating land without compensation, free education and a crackdown on corruption. Picture: Yeshiel Panchia

The large majority of South Africans, including members of the governing African National Congress (ANC), will be glad to see the back of Jacob Zuma as president. Many, if not most, will hope that Cyril Ramaphosa, the party’s newly-elected president, will assume the state presidency immediately rather than entertaining the nonsense of the party electing an “interim president”.

Zuma’s supporters are strongly supportive of the idea of an interim president. It has its roots in the previous succession drama that unfolded after the ANC forced Thabo Mbeki to resign as the country’s president in September 2008. Kgalema Motlanthe, the ANC’s then deputy president, stepped up to the plate to serve in his place until the party president – Zuma – assumed office following the general election in May 2009. It has never been revealed why Zuma did not become state president directly, although it’s clear that they intended Motlanthe was to become a cypher, subject to Zuma’s control.

This precedent is now being bandied about as established practice that has to be followed. But there’s no getting round the fact that it’s being pursued by Zuma and his supporters for dubious reasons. In short, they want to put the brakes on the transition to a Ramaphosa presidency so that they can protect and further their personal interests.

Zuma, in particular, wants to place continuing political obstacles in the way of his being subject to prosecution through the courts on 783 criminal charges. The charges go back to before he assumed office. And there are lingering hopes among his closest acolytes that they can push through a deal with the Russians on nuclear power before their rule ends.

Fortunately, reports indicate that Ramaphosa has rejected the idea of standing aside in favour of an interim president (and certainly, of Nkosazana Dlamini-Zuma, who has been proposed by the Zuma faction). Indeed, this opens the door to a reconsideration of how the ANC should handle the relationship between the two presidencies.

Presently, the ANC elects its own president at a National Congress which is held some year and a half before the country’s general election. Having won that election, the ANC MPs in parliament, who have up until now constituted a majority, fulfil their constitutional responsibility of electing one of their member as state President.

It is this sequential gap between the two elections which leads to unnecessary political speculation and uncertainty, and now stands in the way of the country putting itself back together again after the disaster of the Zuma presidency.

Why Zuma should fall

The idea of an interim appointment is irresponsible. No good reasons have been put forward for postponing Ramaphosa taking over the presidency of the country.

Those against such a proposition might argue that Zuma has every right to remain in office until his term expires. Constitutionally, he does. But politically he is ever more a lame duck, rapidly leaking support in the wake of Ramaphosa’s election to the party leadership. This is why there is an increasingly determined effort to oust him.

Zuma’s detractors inside and outside the party argue, correctly, that the more he hangs around the more damage he will be doing to the ANC and its prospects in any forthcoming election.

In contrast, those still clinging to Zuma may argue that if Ramaphosa takes office immediately, with the possibility that he could serve as state president until the expiry of a second term in office in 2029 (ten years after an election in 2019), he would be doing nothing other than serving his self-interest.

Ramaphosa should ignore such arrant nonsense. There is everything to be gained from his assuming the presidential reins immediately. An extended presidential transition would lead to continuing political uncertainty, of tales of a Zuma push back, and of a divided government.

It would have far-reaching implications for the economy, all of them negative. Hopes that Ramaphosa is a magician and that, with a wave of his wand, he will turn the economy around and restore it to growth are wildly inflated. But the longer there is delay in his becoming president, the faster faith in his magic will recede.

So if Ramaphosa wants to convince onlookers of his abilities to bring about change, he needs to hang tough in his negotiations with Zuma. Quite simply, Zuma has to go on Ramaphosa’s terms if he wants to be taken seriously.

Yet there is more at stake than effecting an immediate transition. Concern has grown during the Zuma years about the way in which power has become concentrated in the presidency beyond what was intended by those who drew up the constitution (Ramaphosa among them).

the period between that election and the next election of a President is not regarded as a term.

In other words, there is no constitutional obstacle to Ramaphosa becoming president now. And there is certainly no suggestion in the constitution that South Africa must have an interim president between now and the next election. This is merely an ANC invention, plucked from the air after the party dismissed Mbeki for its own internal reasons.

It’s not too dangerous to prophesy that, presuming the ANC wins the next two elections, Ramaphosa will – in his time – face pressure to stand down early in favour of his eventual successor. Perhaps, too, he might prove unwilling to go. South Africa would again be put through the quite unnecessary political uncertainty about the transition from one ANC president to another.

It follows that Ramaphosa should do more than simply ensure that he replaces Zuma immediately. As he does so, he should state unequivocally that the ANC will change the way things are currently done. That it will adopt as undisputed practice that the person elected as president of the party should immediately take on the post of president of the country. This would of course require him to resign following the election of his successor as party leader.

This is a normal democratic practice. It is common sense. It would be stabilising. And it would demonstrate that South Africa is no shithole democracy.