How Cele’s new approach to fighting crime could pay off

'Visible policing' as a concept has been discredited. The new minister is on the right track, but needs to focus even more. Police Minister Bheki Cele is seen at the TUT Soshanguve Campus during a quesgtion and answer session with the students regarding security at the campus, 11 May 2018, Pretoria. Picture: Jacques Nelles

It includes the deployment of desk-based police officials to the streets, particularly in “identified hot spots”, while dedicated detectives track and arrest suspects wanted for both organised and repeat violent crimes.

The strategy comes on the back of a multi-year rise in aggravated robbery, and a recent spike in robberies targeting cash-carrying armoured vans. It has already resulted in key arrests, and should thus be celebrated.

But more than 90% of violent crimes recorded each year fall outside the categories named in the strategy.

To significantly reduce violence and harm in South Africa, the police should expand the strategy in three ways: (1) focus on murder hot spots, (2) tackle domestic violence effectively, and (3) implement targeted and evidence-based interventions.

First, for the police service to improve public safety most effectively, it should focus a significant amount of its resources on reducing murder. Murder is the most reliable crime statistic and the best proxy for violence more broadly. Where murder is common, so is other violence. Murder and associated types of violence affect far more people, and cause far more harm than car hijackings, house robberies or cash-in-transit heists.

A significant amount of murder in South Africa is predictable, so police should be able to reduce it. For example, in 2015/16, 78% of murders occurred in just four provinces – KwaZulu-Natal, Gauteng, Eastern Cape and Western Cape. In the most recent crime statistics, 2% of police stations recorded 20% of all murders in the country, and 13% recorded 50% of murders.

Within these precincts it’s almost certain that violence and murder are clustered in hot spots known to local police. Targeting these could significantly reduce murder and other violence.

Many murders are also committed during predictable time periods, specifically over weekends. In 2017 the SAPS reported that most murders (66%) in the Western Cape province occurred from Friday to Sunday, with 56% occurring between 6pm and 3am. Similarly, in 2016 half of murders nationwide occurred on Saturday and Sunday, with 70% taking place between 6pm and 8am.

Murder and violence are also often linked to alcohol. A 2016 analysis of murder dockets found that in up to 48% of murders, the victim or perpetrator was intoxicated.

Based on this information, one can estimate that around a third of all murders in South Africa occur over weekends, in predictable hot spots, in roughly 100 police precincts, in four provinces. If focused police and socio-economic interventions could halve weekend murders in these areas, the national murder count could be reduced by as much as 15% in just a few years and by far more in a decade.

Instead, murder has increased by 22% since 2012. What’s more, by focusing on murder, police will almost certainly reduce other violent crime in the same targeted areas, significantly reducing overall harm. 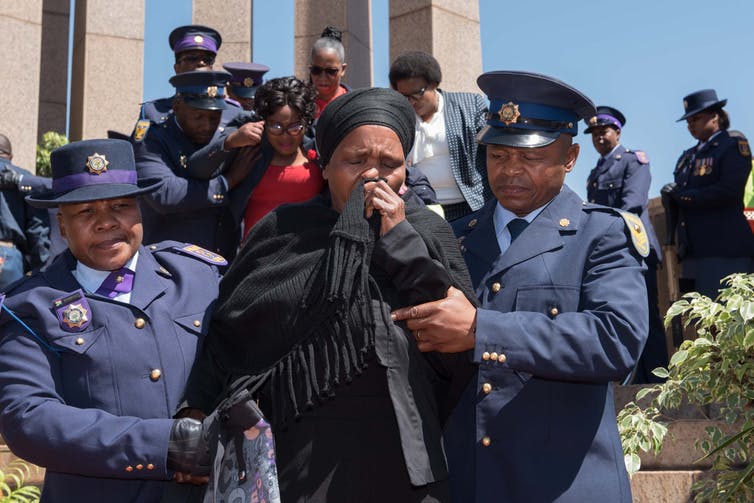 The World Health Organisation and numerous violence experts believe the global murder rate can be halved in 30 years in part by adopting just these kinds of targeted interventions. South African police can and must be part of this, and, wherever possible, should do so in parallel with complementary interventions by other government departments, business and civil society stakeholders.

The second adjustment to the strategy should be a focus on domestic violence. Although most violence is perpetrated by men against men, addressing violence in the home (and in schools), particularly against women and children, is key to breaking its cycle.

Policing domestic violence is not easy. It occurs behind walls and closed doors, and often requires vulnerable victims to risk additional abuse by seeking police help. Nor is there significant evidence that policing alone effectively reduces domestic violence.

But hundreds if not thousands of people call on the country’s police service for such intervention each month, giving the government important opportunities to signal to the public that violence is not tolerated and victims will be supported. To do so, police must appreciate the link between domestic violence and societal violence.

Dedicated police officials should promptly investigate domestic violence reports, especially in murder hot spots, and work with social workers to fast-track interventions, mediations and, if necessary, prosecutions. They must also respond rapidly to any breaches in negotiated agreements or court orders by abusers.

The third adjustment pertains to visible policing. The idea that general “visible policing” will make South Africa safe is appealing but not supported by evidence. Rather, policing is most effective when directed at specific places (hot spots), people (gang members, for example), and crimes (cash in transit heists, street robbery, murder). This is true of both police patrols and investigations.

It’s, therefore, promising that the new police strategy focuses on crime hot spots and crime types amenable to police intervention, such as aggravated robbery perpetrated by organised groups. It is important that the police not try to increase visible police in general, or to target general crime equally, everywhere.

Rather, targeted medium and long-term interventions are key. These should be planned and guided by best practice and crime data, and be implemented in a manner that allows rapid adaption and learning based on contextual dynamics. Participating police must work within the rule of law and treat all those they encounter, including suspects, fairly.

The police’s new strategy is cause for optimism. Its focus on organised and violent crime is rational and necessary but should be fine tuned and expanded. By treating murder and domestic violence as proxies for broader violence, and by deploying resources and focusing efforts to address them using data-guided methods, police could significantly reduce overall violence and harm in South Africa.