The party should stop pretending to be progressive while showing at every available opportunity that they actually represent the right. It would be impossible to come up with a better summary of the DA’s situation this year than professor Somadoda Fikeni’s comment on 702 in February that the party is “busy mutilating itself in a corner unprovoked”.

I couldn’t help but think of this yesterday as Herman Mashaba and Helen Zille continued to give their party the kind of negative PR they are both known for.

Mmusi Maimane keeps saying all the right things about how the DA is committed to transformation and is a nonracial party rather than one supporting white interests. But in practice, the party appears to be dominated by a faction that doesn’t seem to want it to change.

This was evident when Maimane’s comments on white privilege were met with fierce backlash from members including Natasha Mazzone, Gavin Davis, Michael Cardo, John Steenhuisen and Mike Waters. And it is no more apparent than in Helen Zille’s continued expression, again and again, of the same widely controversial opinions on colonialism.

After a Twitter user said a now-deleted tweet by Herman Mashaba comparing Cyril Ramaphosa and Donald Trump reminded him of Zille’s colonialism tweets, she responded: “Do you genuinely believe the legacy of colonialism was ONLY negative?”

This is the exact same argument that got Zille into so much trouble the first time around, when she eventually apologised for her comments and the offence they caused. The fact that she has continued to tweet the exact same sentiments exposes her apology as insincere.

Zille’s argument – that despite the horrific consequences and immoral ideology behind colonialism there are some positive aspects to its legacy – is a terrible one, and not even because it’s false. The truth is, if you wanted to find positive aspects to any of the world’s most immoral power structures, you could. Why you would attempt to do this, though, is a mystery.

I doubt Zille would ask us to find the positive side in Hitler’s Third Reich, but if you were forced to at gunpoint, you could mumble something about the way the dictator decreased unemployment and crime and offered Germans new hope, before mass genocide and attempts to take over Europe brought about his downfall.

Obviously, pointing this out is absurd – any benefits for Germans that came with Hitler’s rule are clearly overruled by the slaughter that came afterwards, not to mention the eventual collapse of the reich and the division of Germany into east and west.

Zille appears to fail to see that, for black South Africans, colonisation is looked at as a historical cataclysm the effects and pain of which can still be felt in a similar way to how a young Jewish person may see the holocaust.

I’m not even suggesting something so radical as Zille changing her views.

I am old enough to realise that you can’t convince flat earthers that the world is round or anti-vaxxers to vaccinate their kids.

I am suggesting a far simpler solution.

READ MORE: Zille confirms she has been approached to replace De Lille

Since she clearly doesn’t realise this, I would suggest the party distance itself from her, as they were meant to after the outcome of her internal disciplinary inquiry that ruled that, while she should continue her duties as premier, she would no longer be involved in party activities.

The DA appears to be doing their best to ignore this. The federal executive, the same body that ruled she should cease involvement in party affairs, recently appointed Zille to an important panel that will decide who the DA sends to parliament. Even more recently, Zille told an interviewer that several members of the party had approached her to find out if she’d be willing to replace Patricia de Lille as Cape Town mayor.

Fortunately, Zille said she wanted to finish her tenure as premier and would turn down the offer. Her return as mayor would be disastrous for any attempts to at least make the DA appear to be interested in transformation ahead of the 2019 elections. Zille is simply bad PR for the party – the problem being that large sections of their leadership appear not to realise this.

Then there’s Herman Mashaba. His pro-Trump tweet may have outed him as a right winger, but for many who have noted his neoconservative values and the constant accusations of xenophobia levelled against him, this was never a secret.

If appearing to be progressive is as exhausting for the DA as it seems to be, there’s another option. They could simply abandon the pretence of being an inclusive party and embrace their right-wing side. This would allow them to stop appearing so schizophrenic and to finally fully appeal to the conservative, predominantly white, section of their support base. They could properly establish themselves as the neoliberal, anti-immigrant party that many of their supporters already believe they are.

Maimane and other members of the party’s more progressive wing, such as Mbali Ntuli and Nqaba Bhanga, would have to find a new home, but I’m sure senior DA leaders such as Steenhuisen and Mazzone would get over it.

This is my advice, but as self-reflection does not seem to be among the party’s primary talents, I don’t doubt they’ll ignore it. 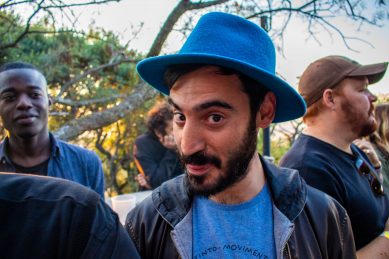