Yes, it might have been just one flag among many in the crowd, but it opens a huge wound among the majority of South Africans. 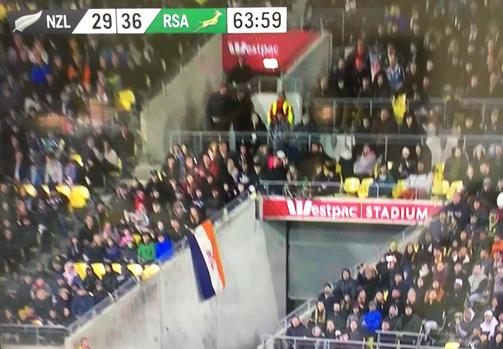 The old SA flag being shown at the Westpac Stadium in Wellington, New Zealand, during the rugby Test between the Springboks and All Blacks, 15 September 2018. Picture: Twitter

What a great victory it was for the Springboks over the All Blacks in New Zealand this past weekend. Huge, historical and totally unexpected. Just short of miraculous.

And South Africans are happy. Even the Presidency sent out a tweet to celebrate this victory.

But someone at the stadium saw it fit to brandish the old South African flag. In the midst of that great and historical South African victory someone, probably a South African who has left our shores to seek a “better life”, thought it would be great to display a flag that to the majority of South Africans represents years of their subjugation and humiliation.

It is easy to urge all right-thinking South Africans to ignore that person because they are stuck in the past. They refuse to change and, most importantly, did not display the flag on SA soil.

A portion of SA thinks the huge majority of this country is sensitive over issues they have no control over. And they are always first to shout: “Let’s leave the past and concentrate on what brings us together, like the Springboks’ victory over their arch-enemies.”

After all, what power do South Africans have over an errant Springbok supporter?

The reason Adam Catzavelos was exposed as a racist bigot was because a friend or family member within his close circle decided that they had had enough of his conduct.

When he released his racist video, they passed it onto the media and, as we know, the rest is history.

South Africa’s reconciliation project, which is now almost a quarter of a century old, needs those kind of people to stand up and say “enough is enough, we cannot stand by and let racists continue to thrive among us.”

Racists like the bigot who brandished that old apartheid flag in New Zealand can only do that because of the space those around them afford them to display their racism. What a great reconciliatory effort it would have been if photographers and television crews at the stadium had captured images of those spectators around the racist idiot, relieving him of that flag.

The problem with South Africa is that we talk over each other.

Those displaying the flag and those preaching “let’s just forget the past” do not know that each time a racist incident plays out in the media, the flag comes to represent all the hardship, all the racist insults, all the worst things that the architects of apartheid had wished would happen to black people, their intended victims.

No amount of good feelings and well wishes will make black people “forgive and forget” the place of that flag in their history. The only thing that will make them forgive and forget is their counterparts depriving racists among themselves of the space to display their racism.

When Siya Kolisi led out the team that beat the All Blacks on Saturday, he would have been disheartened to know that playing his heart out for his beloved country would create an opportunity for people who do not like people of his skin colour to don the Springbok jersey to display their racist attitude for the world to see.

Yes, it might have been just one flag among many in the crowd, but it opens a huge wound among the majority of South Africans.