This week, we look at two more layers of safety. There are hundreds of things we can do to keep ourselves safe. We are only going to chat about a few of them at this stage. They are simple and easy to implement.

These are deterrents and safeguards that you could use in your place of business, your home or community, which can foil and discourage break-ins. There are many and they could range from burglar bars and security systems to a dog (which is shown to be the greatest deterrent to house break-ins in this country), a community watch programme, and smash-and-grab film on your car windows. These may be visible deterrents, warning a perpetrator to steer clear, or hidden traps that cause them to abort. Doing a personal protection course is also a once-off measure and another layer of safety between you and those who seek to harm you. The more layers you have, the less attractive you are to criminals.

It cannot be stressed how important this is and how dangerous bad daily habits can be! Who among you are guilty of the following?

Little things like this can make the difference between you being selected as a target or not.

These daily habits can stop us getting into situations that could have been avoided, but we are often in a hurry and then default to the absolute worst excuses: “I always drive with my windows open,” or, “I have always done it this way and nothing has ever happened.”

When you do something stupid the day before and nothing happens it does not make it a good idea the next day. It’s like saying, “I’ve never been murdered before.”

I was chatting to a group of ladies the other day and mentioned that keeping windows up at robots was a good idea. One of the ladies looked at me and said, “Mark, I feel so guilty when I arrive at the robots and my window is down, and I wind my window up while the guy on the side of the road is looking at me. I am worried he is thinking that I am thinking he is a mugger!”

Really? Are we really concerned about what other people think when we are putting our safety and the safety of those we love first? If I offend you when I put my wellbeing first, I really don’t care. It’s not about being rude. It’s about not putting yourself in a situation where you can be hurt or taken advantage of – and if this offends people, then it’s too bad!

Another example: We recently did a talk at a wellness day at a well-known company whose offices are in downtown Joburg. Now apparently when you work there you either arrive early and leave early or arrive late and leave late to avoid sitting in traffic at the robots where brazen criminals basically walk among the cars and help themselves to valuables in cars with absolute impunity.

On the day of the event the woman I had been dealing with shared what had happened with her the previous day and was visibly shaken.

She had left work later than normal and was sitting in her car in traffic with the window slightly down when a hand came in through the small gap and put a knife at her throat, with the attacker demanding her cellphone, rings, purse, etc.

She handed over whatever she could, and the assailant walked away casually. While sitting in the car in tears, two more men walked past. She pleaded with them to help her, as she had just been robbed.

You know what? They put a gun against her head and asked, “What else have you got?”

She was robbed twice in the same spot and her car had not moved an inch.

Could this have been avoided? Definitely! Keep your windows up at traffic lights. It’s a good daily habit! And better yet, make sure they are anti smash-and-grab.

Your safety, above all else, should be your primary concern while driving.

It’s true! The more layers of safety you have, the less attractive you will be to criminals. 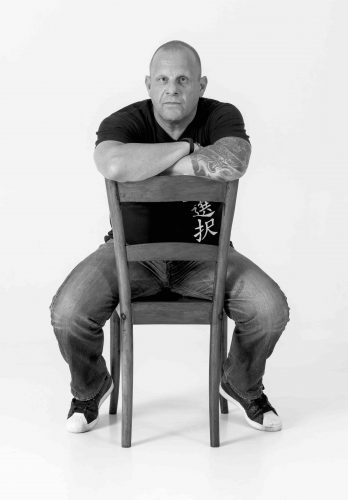 He holds a 6th dan in karate and has over 45 years’ experience in the personal protection field.

He does talks and hosts INpowered programmes to corporates, schools and small groups.

Reach him with your question about personal protection at mark@inpowered.co.za and he will try to answer you in future columns.