UP spokesperson said the university was aware of the video. 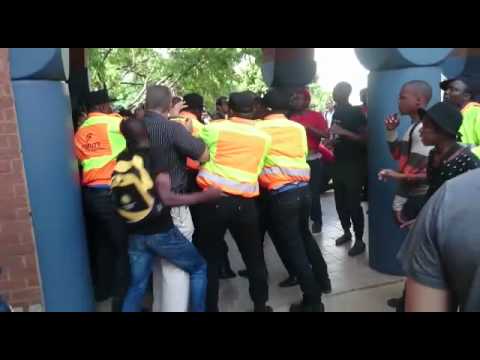 While chaos erupted in the hallways of the University of Pretoria, three students who were among the 27 arrested on Friday have had public violence charges dropped against them after appearing at the Pretoria Magistrates’ Court on Monday.

The students, who made their appearance dressed in black, were arrested for public violence and malicious damage to property after they stoned a police vehicle, damaging the windscreen.

A video has since been circulating of an alleged student hitting a supposed security member with a rock to the head.

UP spokesperson Anna-Retha Bouwer said the university was aware of the video and would be investigating it. She could not confirm whether the attacker was a student nor whether the victim was a member of the university’s security team.

Meanwhile back at court, no explanation was immediately given for the move to drop all charges against three of the students.

The students, led by the Economic Freedom Fighters student command (EFFSC), were demanding that Afrikaans be scrapped as a medium of instruction at the university.

Leader Kabelo Mahlobogwane said the party was not satisfied with the outcome.

“We want charges to be dropped for everyone and Afrikaans must fall. We are not going to stop or rest until the language is scrapped,” he said.

The matter was postponed to 7 April.

Members of Economic Freedom Fighters student command (EFFSC) staged protests and clashed with members of AfriForum and AfriForum Youth at the institution last week, demanding that Afrikaans be scrapped as a language of instruction.

Bouwer said classes and tests at the Hatfield campus had been temporarily suspended on Monday and that the decision was made to ensure the safety of staff and the students.

On Monday Bouwer said a task team was appointed to review the language policy as all academic programmes were offered in English and some in Afrikaans.

“The proposals are that in future, all lectures should be in English. Afrikaans and Sepedi are proposed for use in providing additional support to students, in line with the University’s promotion of multilingualism and to facilitate student success,” she said.

She said changing the language policy was a process which should be considered by the university’s governing council.

“Any changes to the language policy also have to be submitted to the minister of higher education and training. Nothing has been finalised yet.”