A lot of emphasis has been put on his personal battle with Hurricanes’ All Black flyhalf Beauden Barrett, but Jantjies said it’s never personal for him. 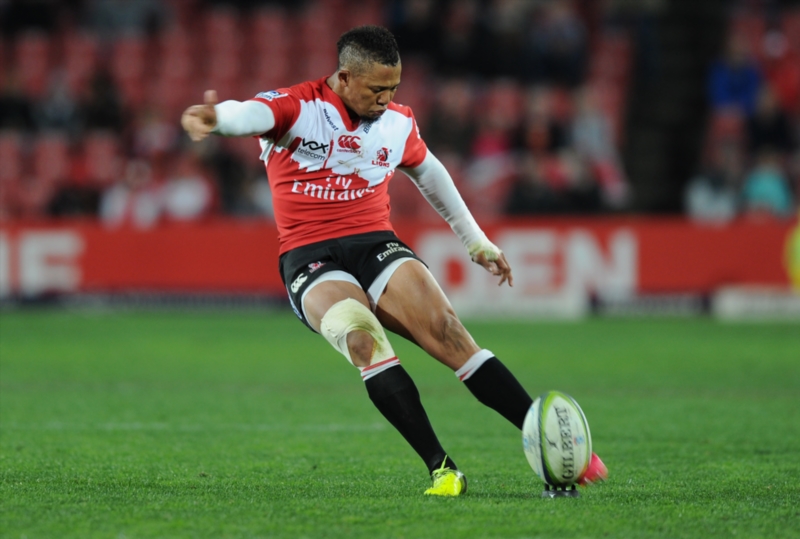 If little touches of genius mark the way Lions flyhalf Elton Jantjies plays the game, it is his distinctive hairstyle and full-sleeve tattoos which distinguish him as an individual. The player who has been nicknamed “BrilJantjies” turned 26 on August 1 and has developed the ability to change a game, something he puts down to his decision to spend the time between one Super Rugby tournament and the next in Japan, and that he is now enjoying his rugby more that he has done in the past.

“I built a lot of confidence in terms of playing – that’s why I went to Japan after Super Rugby. I really enjoyed that aspect of my game, to keep my continuity going and to make sure I start every single week,” said Jantjies. But the career of the player born in Graaff Reinet, which started with the South African under-20 side in 2010 and is now regarded as a natural choice for the Springbok No 10 jersey, has not all been plain sailing.

He went through a crisis when the Lions were kicked out of Super Rugby in 2013 and he joined the Stormers on loan. This upheaval was followed by the sudden death of his father from a bee sting. But his character was built by the turmoil in his life. “Injuries also affected me, like in 2013 when I had my shoulder operation. But I came back and I’m really enjoying my game at the moment,” said Jantjies.

“If you are coming through the ranks, it’s a lot about the individual. But now it’s more about the team. “Where I’ve grown in my career is with my leadership, ensuring that I can help any young guy or player.”

But this week his focus has been on the massive occasion of this morning’s Super Rugby final against the Hurricanes in Wellington – a historic appearance for the Lions in their first Super Rugby final. A lot of emphasis has been put on his personal battle with Hurricanes’ All Black flyhalf Beauden Barrett, but Jantjies said it’s never personal for him.

“I don’t have individual battles. It’s all about the team for me, to ensure I do my job well in the team.” The last time the Lions played the Hurricanes they were taught a rugby lesson when the Kiwis demolished them 50-17 at Ellis Park in their pool match in April.

“Beauden is playing great rugby at the moment and the Hurricanes are a quality side. When we played them the last time we learned some harsh lessons, but we are better prepared this time around,” said Jantjies.

“Obviously they’re one up on us, but we have reassessed from Monday and prepared even better than we have done the past two weeks. “But we are feeling blessed that we have one more game to go and we are really looking forward to it.

“I need to keep my consistency going, making sure the Lions get a good result, and that will obviously work in your favour as an individual. I have a few more goals to achieve and improve my game.”

Apart from starring in all three Tests against Ireland in June, Jantjies also scored 39 points in the two recent Super Rugby play-off matches – 17 against the Crusaders in the quarterfinal and 22 against the Highlanders in the semifinal, which included the opening try of the game.

“I’ve got my own personal goals and as soon as the new year started, I wrote my goals down,” said Jantjies. “One thing I didn’t achieve last year was going to the World Cup. It’s something I left behind and, hopefully, I will get another chance in the future.”

Bok coach Allister Coetzee recently remarked that he believed Jantjies had gained greatly from spending time in Japan, making him a more mature player. It also greatly helped him with decision-making on the field “The time in Japan has helped my fitness and conditioning. They are very professional in terms of team aspects, a lot of game orientation,” he said.

“I don’t have a lot of time in Super Rugby, a few seconds to make better decisions, communication is a bit different [in Japan] as we have a lot of foreigners in the team. “So I have to focus a bit more and make sure everything works out on the field. I’m the one that has to make the calls.

“And through that, I was growing in my leadership and could provide my feedback being back with the guys who have, in turn, gained experience in the Currie Cup and through Super Rugby.”