Black learners at the school claim they were told to straighten their 'untidy' natural hair and stop speaking anything but English. 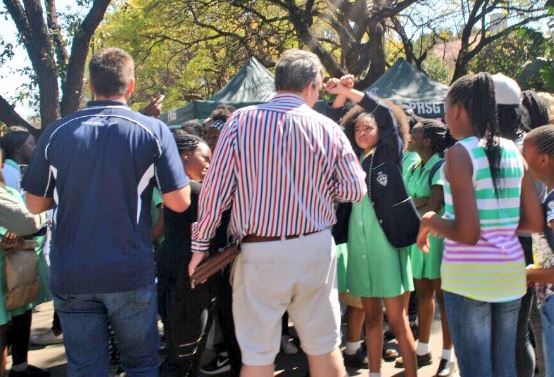 Gauteng MEC of Education Panyaza Lesufi announced on Sunday he would be visiting Pretoria Girls’ High School on Monday morning to address allegations of racism.

In another natural hair debacle in schools, an online petition is circulating and addressed to Lesufi to stop the chaos that has broken out.

According to the petition, which garnered 4 201 signatures by early Monday morning, the school is being accused of forcing black girls to straighten their natural hair and “conspiring” when standing in groups. The latter charge appears to be related to the fact that only English is allowed to be spoken.

Lesufi, however, told Radio 702 that he had heard the allegation that when pupils spoke Afrikaans, no action was taken against them for that.

“No wonder you black girls don’t excel academically, you’re always focused on the so-called racial issues of the school,” one teacher allegedly told the protesting learners.

As a result, the students “being forced” to straighten their hair went on a protest on Sunday, with security personnel threatening to arrest them.

“We were told we’re too loud; have no manners; we weren’t allowed to speak our own language, it’s rude,” one of the learners complained.

Videos of the protesting girls have been circulating and they could be heard telling the learners: “We will arrest all of you.”

“They are going to arrest all of us, girls; yes take us, arrest us,” another of the girls can be heard saying.

The hashtag #StopRacismAtPretoriaGirlsHigh has been trending ever since, with some making accusations that government hired K9s–  armed security – to deal with the protesting learners.

Taking to Twitter, Lesufi said he would be visiting the school on Monday morning to get a briefing and address the matter.

Leave it with me. There's a petition directed to me with demands. Hence my intervention https://t.co/kIMKxuo33C

“Leave it with me. There’s a petition directed to me with demands. Hence my intervention. Will visit the school tomorrow morning. It won’t happen under my leadership, NEVER!”

The EFF Student Command at the University of Pretoria has announced its plans to march to the school to address the issues.

We will gather at Piazza and move together out of campus, walking on the pavement towards Girls High. THE GIRLS NEED OUR SUPPORT.

The school’s principal was not immediately available for comment.

This what some have been sharing about the issue on social media:

@ntsikimazwai Did you know that they hired K9's and armed security for the black girls protesting at Pretoria Girls High ??

An African child's hair
This is her crown
She will will not hide it to please you ✊????#StopRacismAtPretoriaGirlsHigh pic.twitter.com/2qtxjvRl8v

That hair! Is Power!
It does not cower, it stands tall! Announcing its presence! #StopRacismAtPretoriaGirlsHigh pic.twitter.com/MGQU3BHINo

What a time to be alive ✊???? These girls are doing what generations b4 them couldn't do #StopRacismAtPretoriaGirlsHigh pic.twitter.com/OxduXOxIce