Vavi gets even with Blade as ANC gives SACP ‘cold shoulder’

Zwelinzima Vavi appears to be having the last laugh after the SACP leader was the most vocal about calling for a law to shield Zuma from public insults. 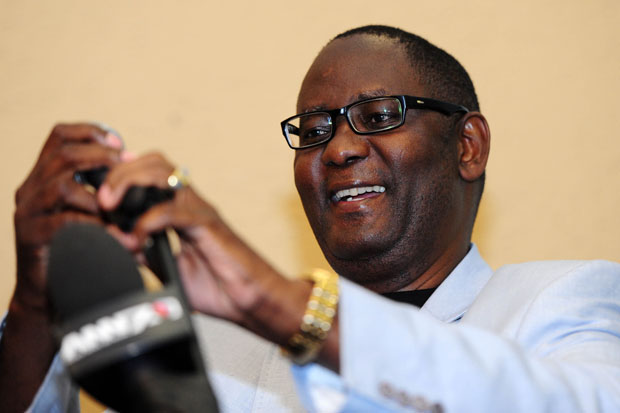 Former labour federation Cosatu general secretary Zwelinzima Vavi has had the last laugh at the SA Communist Party’s Blade Nzimande and his communist comrades in the awake of their call for President Jacob Zuma’s prerogative to hire and fire Cabinet ministers to be reviewed amid “rumours” that the party’s leaders could be on the chopping block for their public criticism of Number 1.

Taking to Twitter on Monday following the SACP’s briefing on Sunday about the outcomes of its Politburo meeting post the municipal elections, Vavi wittily asked his more than 400 000 followers on the social networking site: “Why must we take SACP serious now when they were best defenders yesterday” of the proposed “insult law” to punish anyone who publicly insulted Zuma.

Why must we take SACP serious now when they were best defenders yesterday 'Insult law' commonplace in many countries https://t.co/Ill3cLxjy0

Nzimande’s staunch call four years ago for an “insult law” – legislation that would protect Zuma against “unfair” insults as president of the republic – made headlines.

“People can differ with me and you can insult me as you like, but disrespect, that is not acceptable,” Nzimande said in November 2012 in defence of Zuma against criticism of the overcharged upgrades made to his Nkandla homestead, as well as Brett Murray’s The Spear artwork, which depicted the ANC leader with his genitals exposed.

Fast-forward to 2016 and the country’s political terrain is a totally different ball game.

According to media reports, the SACP’s relationship with Zuma is at its lowest ebb, with the party launching a salvo at the African National Congress (ANC) leadership on Sunday and expressing its disappointment at its tripartite alliance partner’s failure to act decisively against corruption and denounce the clampdown on what it calls Treasury’s “struggle against corruption and corporate capture”.

Vavi scoffed at Nzimande’s 2012 “insult law” suggestion now that the party is under siege. He tweeted: ‘insults law’ won’t shield Nzimande from his ANC opponents.

The tide is turning and Blade Nzimande is Serial Opportunist…

On Sunday, City Press reported that the Communist Party’s call to curb Zuma’s presidential powers followed the governing party’s decision in May to drop its state capture probe against the Gupta family, who are close friends of Zuma’s and have been accused of unduly benefiting from state contracts and “shopping” for ministers.

The decision is said to have caused friction between the SACP and ANC when the reds called on Zuma to distance himself from the controversial family and the so-called Premier League that allegedly backs him.

Solly Mapaila, the second deputy general secretary of the SACP, said that if Nzimande were to be removed as higher education and training minister, the move would herald “the end of the alliance”.

“If he [Nzimande] is removed just because he doesn’t like the positions of the ANC, obviously we take issue with that. We have fought for elections on the platform of the ANC, as the SACP. That will be a clear declaration of war against the communists.”

Vavi was, however, also reminded by his followers that he was in no position to throw stones in the face of his previous political leanings and significant, with the communists in helping to steer Zuma to power at the Union Buildings.

The trade unionist was expelled from Cosatu in March 2015 after a unanimous vote by its central executive committee to give him his marching orders after his falling out with his comrades and a string of public statements against corruption and a scandal around sexual harassment allegations.

Vavi nevertheless defended himself as someone who would never have supported “state looting”.

But you want us to forget how you helped bring Zuma to power… https://t.co/FKIkM08tNd

Yes I did that but never ever supported looting of state coffers through nkandla and other schemes https://t.co/faxEdlnh4x

Sqme reasons you shouldn't be taken seriously then. Hypocrisy knows no bounds, have you fallen this low? @mailandguardian

The only mistake I committed was to support a man facing 783 charges believing it was a plot. But long apologized https://t.co/RdqTtPxaXE

No matter what ANC fails to do, it remains electorally powerful
14 hours ago
14 hours ago

No matter what ANC fails to do, it remains electorally powerful
14 hours ago
14 hours ago