Dressed in his red regalia in his Elardus Park home, Mukandila, now 46, said being called on stage to receive his PhD was surreal. 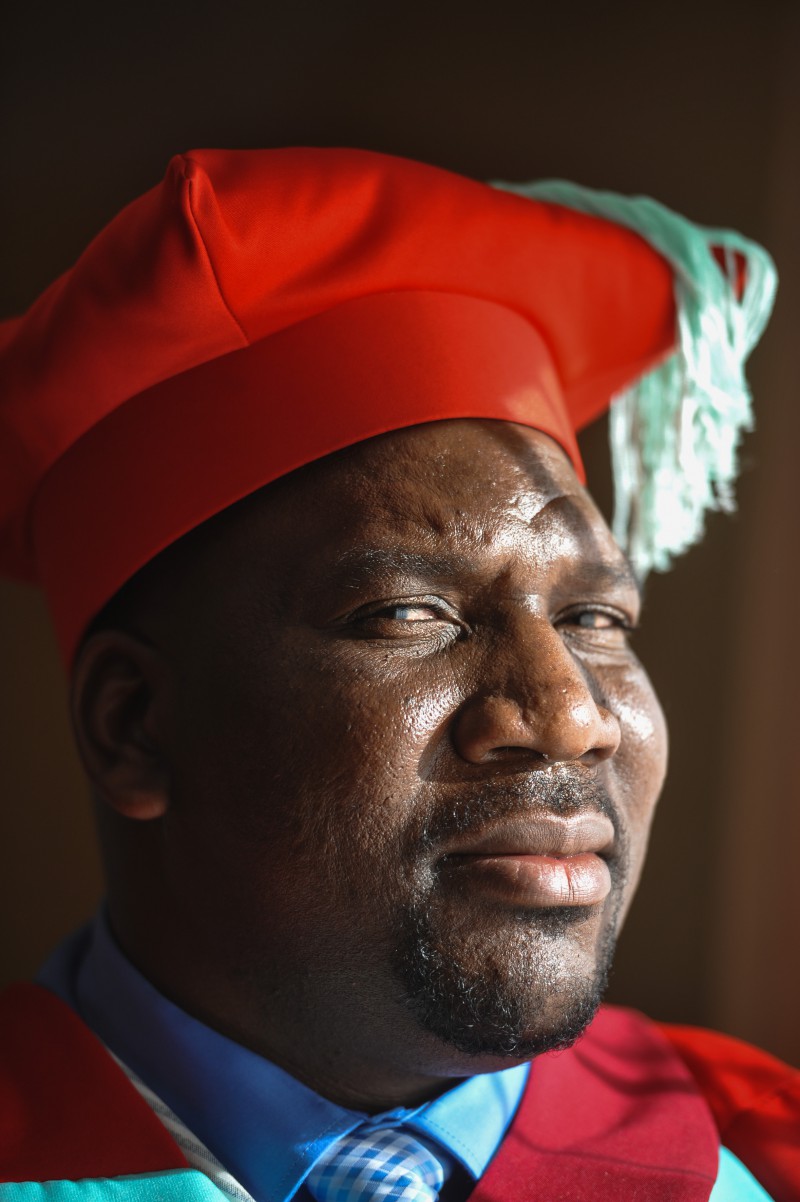 Estime Mukandila a foreign national that escaped violence in the DRC, recieved his PHD at the University of Pretoria, 1 September 2016, Centurion. Picture: Jacques Nelles

He had to leave his pregnant wife during civil war and unrest in the Democratic Republic of Congo (DRC) to pursue a better life in South Africa, but when Estimé Mukandila enrolled at the University of Pretoria in 2004, he knew no English.

Twelve years later, Estimé Mukandila stood alongside other esteemed academics when he received his PhD in civil engineering at the University of Pretoria’s graduation ceremony yesterday.

Mukandila, who was 34 years old at the time, had obtained a BEng mining degree from the University of Lubumbashi in DRC and was appointed as a junior lecturer at the same institution.

The political unrest and unsecure future led him to South Africa in April 2004 as an asylum seeker.

“It was difficult when I arrived. My passion for studying directed me to the University of Pretoria. I was fortunate to find a lecturer, Professor Louis Roodt, who offered to help me. But I couldn’t speak English as my first language is French. Imagine the frustration I went though.”

He enrolled in the second semester of that year to complete his honours.

Due to lack of understanding, Mukandile failed his first test, but remained committed and used a French-English dictionary to assist him with his studies.

Holding up the dilapidated dictionary, Mukandile said he had received it from a South African priest.

“I remember people looking at me, thinking I won’t make it through this course. I decided to spend most of my time to study my subjects and improve my English.

“I often read my subjects with this dictionary and passed all of them, without failing, with a final mark of 73%,” he said with a smile on his face.

Struggling to pay for his fees, Mukandile expressed gratitude to Professor Roodt, who helped him find odd jobs. Roodt also assisted him in paying his fees.

His wife and their first child joined him in South Africa in 2005, but Mukandile had to leave them again after he was offered a temporary job to work at Aurecon as a material engineer later that year.

“I was based in Angola but worked across nine countries in the province. I was making money, so I was able to send it to my wife to pay rent. I could only come home to my family every six weeks for 10 days.”

A perseverant Mukandila went further to enrol in a PhD at UP in 2012, after finally being registered as a professional engineer with the Engineering Council of South Africa.

Dressed in his red regalia in his Elardus Park home, Mukandila, now 46, said being called on stage to receive his PhD was surreal.

“I thought ‘wow’. I was very happy and, as a Christian, I believe it was commitment and faith that led me to where I am today. I won’t say I’m the most intelligent. I just persevered.”