Why Audi didn’t give Semenya a car

Audi explained why it presented Van Niekerk with a sports car but did not extend the same courtesy to fellow gold medallist Semenya. 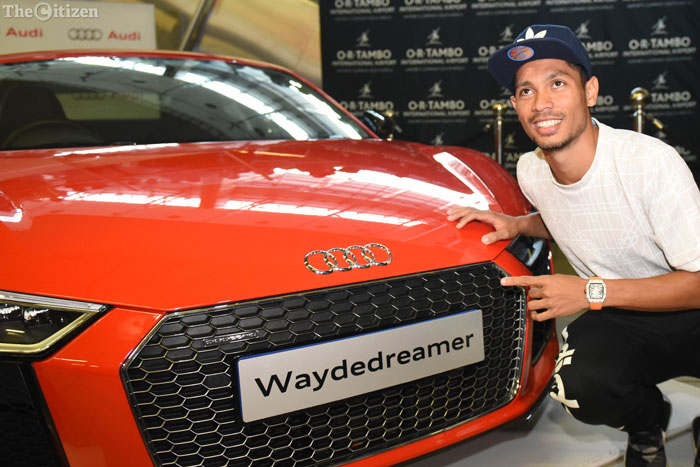 Olympic 400 metre champion and new world record holder, Wayde Van Niekerk returned home to South Africa today at OR Tambo International Airport, 7 September 2016. He was greeted by hundreds of fans. His sponsor Audi also surprised him with a new Audi R8, which was also at the airport waiting for him. Picture: Neil McCartney

Wayde van Niekerk’s return home on Wednesday sparked yet another debate on Twitter. On arrival, the gold medallist was handed keys to a new Audi R8 sports car as part of his sponsorship deal after his Olympic win.

Van Niekerk and fellow Olympian Caster Semenya made South Africa proud when they bagged gold medals at the Rio Olympics last month.  Van Niekerk received R150 000 in addition to the R500 000 he got for his gold medal, while Semenya received an additional R100 000 to the R400 000.

As words of congratulations for the Audi flooded his Twitter timeline, one fan asked Van Niekerk where Semenya’s car was.

He responded to the fan: “I love and respect Caster Semenya, so let’s not compare our blessings. And use our talents to inspire each other,” adding he would just love us all to get along and be a unit “for once”.

Semenya charged to victory in the women’s 800m final at the Rio Olympics, securing the title in 1:55.28 to break her own national record by 0.05. On Thursday last week, she won the overall season title in the women’s 800m event at the Diamond League series final in Zurich, becoming the second SA athlete to win the League race in any contest.

With all the prize money the Olympians received, tweeps are asking why it seems as if Semenya has received less than what Van Niekerk got. Radio personality Anele Mdoda also took to Twitter on Friday morning to ask Audi where Semenya’s car was.

to the Olympic Games. The R8 was presented to Wayde in lieu of him breaking the world record, (2)

“Hi Anele, to reiterate what has already been mentioned, we had chosen Wayde, Cameron and Anaso as Audi Sport Ambassadors prior,” Audi responded.

as was done with Cameron post his world record breaking performance in the 2012 Olympics. (3)

Audi said the R8 was presented to Van Niekerk on condition that he broke the world record, the same deal that was made with Cameron van der Burgh in the 2012 Olympics.

Hi Anele, to reiterate what has already been mentioned, we had chosen Wayde, Cameron and Anaso as Audi Sport Ambassadors prior (1)

While some agreed it was a matter of sponsorship, some insisted Semenya did not get a car because she was a woman.

Last month, Van Niekerk’s win divided the nation on Twitter when his ethnicity was brought up, with some saying it was victory for blacks (that political definition of blackness that also includes coloured and Indian people), while some said it was specifically for coloured people.