Maphatsoe has defended the military wing’s composition of membership and disputes allegations they are a militia. 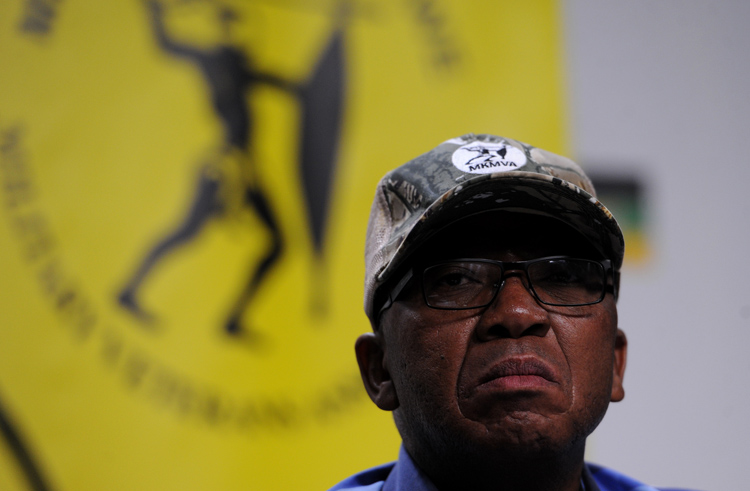 The chairperson of the ANC‘s former armed wing – the Umkhonto weSizwe Military Veterans’ Association (MKMVA) – Kebby Maphatsoe, has sought to clarify the muddle over the apparently youthful membership of the organisation that became apparent during Monday’s protest by the #OccupyLuthuliHouse faction, which MKMVA opposed.

At the intense protest, which saw brawls breaking out between opposing ANC groups, images of men who looked a bit young in camouflage uniform, protecting the party’s Joburg headquarters, baffled social media users.

The MKMVA members called the occupy campaign organisers “hooligans” for their demand that the ANC hold a consultative conference to look into its problems and the immediate resignation of President Jacob Zuma and the party’s entire national executive committee.

Speaking to SAfm’s #ForumAt8 on Thursday, Maphatsoe defended the soldiers from accusations that they were some sort of illegal militia and that they had prevented ANC secretary-general Gwede Mantashe from receiving the protesters’ memorandum.

“…You know there are people who wore uniform similar to ours; like musicians, you sometimes see them wearing camouflage, so on that day there were some members of the youth league who were wearing similar. It’s not an MK uniform because we could account for our members.” he said.

Maphatsoe‚ who also serves in national government as deputy to Minister of Defence and Military Veterans Nosiviwe Mapisa-Nqakula, dismissed the public ridicule around the veterans, saying their members’ minimum age ranged from 38 to 39.

He said the composition of their membership was about 30 000 according to the MKMVA’s certified register.

He said the league’s mandate was to be active on matters related to its mother body and to protect it from people threatening its revolution.

“One of its objectives it is to integrate some of our structures in the African National Congress and also to participate in the political life of the ANC, but also to promote the interest of its members; to voice their collective opinion on matters that pertain to their self-development,” he said.

He also denied MKMVA members had rebelled against Mantashe and prevented him from addressing the disgruntled ANC group.

“I was there. I am the one who picked [up Mantashe] from the office and the comrades were doing a guard of honour. There was never a point where MKMVA tried to stop [Mantashe] from accepting the memorandum.”