‘That shows how much they value disabled sport in this country,’ says gold medallist Du Toit. 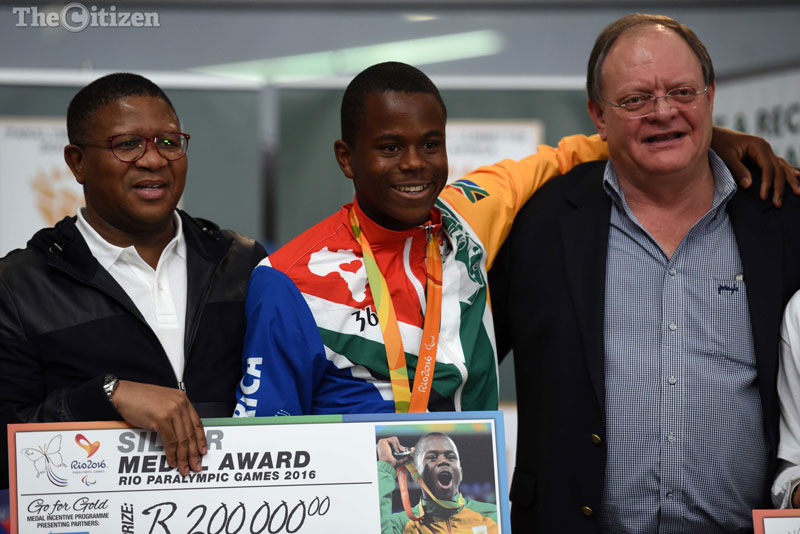 Ntando Mahlangu recieves his cheque during an event at OR Tambo International Airport to celebrate the success of the South African Paralympic team afrer they arrived back in the country, 20 September 2016 Picture: Neil McCartney

The nation’s Paralympic stars were pleased to be given similar support to their able-bodied compatriots, according to sprint sensation Charl du Toit, after the SA squad returned home to a festive reception yesterday from the Rio Games.

Ahead of the 11-day showpiece, which ended on Sunday, Sports Minister Fikile Mbalula had announced the athletes would receive the same financial bonuses as the country’s Olympic stars, with R400 000 on offer for gold, R200 000 for silver and R80 000 for bronze.

Having boosted the cash bonuses given to the Olympic athletes on their return with 10 medals last month, Mbalula confirmed there would also be an additional cash injection from government after 17 podium places were achieved by the Paralympic squad.

Gold medallists would get an extra R100 000 and those who broke world records would receive R150 000. Silver and bronze medallists would also take home additional bonuses, though their extra R30 000 was not as much as the R70 000 and R50 000 given to Olympic medal winners.

“I’m glad we got the same amount of money,” said double gold medallist Du Toit, the team’s only world record breaker (11.42 in the 100m T37 sprint) who was set to receive over R1 million in bonus payouts. “That shows just how much they value disabled sport in this country.”

As one of 23 para-athletes who were included in the Operation Excellence (Opex) programme after the 2012 London Games, along with 25 able-bodied athletes in various sports, Du Toit said the funding and support had also played a key role in his success.

“Being on Sascoc’s Opex programme, we also get the same as the able-bodied guys, so hats off to them.”

The SA team finished 22nd in the medals table at the Rio Paralympics with seven gold, six silver and four bronze.