The EFF leader and his legions of supporters did not take long to respond to Kunene's comments made in an interview on Wednesday morning. 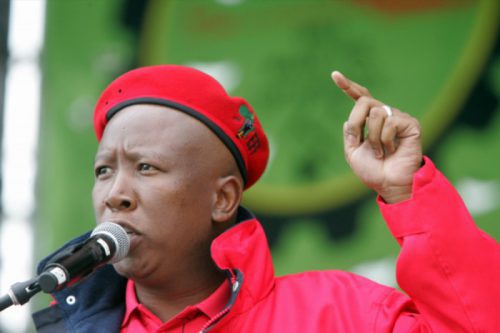 Economic Freedom Fighters (EFF) leader Julius Malema has taken to Twitter to lash out at Kenny Kunene over comments he made on SABC2’s Morning Live on Wednesday.

Responding to the comments, Malema said Kunene must first get 20 000 national votes before he gets a mention or a debate from him. “Otherwise he remains irrelevant”, further saying in Sepedi “Wa swa moloi” (the witch is burning).

He must first get 20k national votes before he gets at least a mention from me not even a debate otherwise he remains irrelevant,Ok…

The EFF leader was referring to the fact that the Patriotic Alliance got 13 263 votes in the 2014 elections when Kunene was still its secretary-general. The party only got above 20 000 votes at this year’s municipal elections. However, Kenny had already left.

I'm not wit a political party.u r a coward who preys on old women n men by insulting them. u r afraid I'll expose the conman u r in ur face https://t.co/yBFmCaSQbG

Kunene hit back at Malema, calling him a coward “who preys on old women and men by insulting them”.

“You’re afraid I’ll expose the conman in your face,” he said.

During the interview, Kunene threw several insults and allegations at his former comrade in the EFF.

He was asked for the real reasons why he left the EFF after being a founder member of the party with Malema and EFF deputy president Floyd Shivambu.

He started by saying that, in his opinion, Malema was a liar who had failed to produce his passport to prove that he had not met with members of the ANC in Maputo in 2015. He called Malema “Judas Sellout”, as a play on Malema’s names, including middle name Sello.

He said later in the debate that Malema deserved the “sellout” tag because of his having met Lord Robin Renwick in London, and his then appearing to change his views on several important matters.

“He does not believe in the legacy of Nelson Mandela. When I defended Mandela, they gave me a DVD that was shot by Eric Myeni of how when Mandela came out of prison he said we should nationalise, but when he came back from London he said that the hatred of capitalists towards nationalisation is so visible that you can cut it with a blade,” he said.

However, apart from Malema, Kunene received criticism from Twitter, with most saying he was using Malema’s name to stay relevant. Some, however, supported him, calling for a TV debate between the two.

These were some of the comments

Kenny Kunene has passed his sell by date…

RT if you think Kenny Kunene trys too hard to remain relevant to the public.

Maybe we shouldn't completely ignore the things Kenny Kunene said. Defend CIC but use your brains as well. Sengyasho njeeeee

Kenny Kunene is like some drunkard who woke up from Mavuso in Hammanskraal, with i bhabhalazi.

So if Kenny Kunene didn't talk about @julias_s_malema the interview would have basically ended in about 60 seconds then?

Kenny Kunene is convinced eating Sushi on a naked woman n bonking 15 crazy celebs is revolutionary n entitles him to a debate with the CIC.

Kenny Kunene ain't even in the same league with @Julius_S_Malema but he has the nerve to challenge him on a public debate. Smh!

I would like to ask you not to respond Kenny Kunene , he is seeking relevance.

I'm so sad that the Kenny Kunene interview is over???? @MorningLiveSABC
It was like watching an episode of Real Housewives.????

Honestly when i joined EFF my daily prayer was Kenny Kunene to fall off ???????? i couldn't be associated with him

Kenny Kunene was recruited to EFF, I don't even remember seeing in Nasrec. Y he likes saying he founded EFF? The way ths man likes attention

Kenny Kunene has been trying to get Julius's attention for a while nou????

I actually dont understand why this Kenny Kunene character is being given airtime, yhuuuuuuuuu