UP students suspended and asked to leave res

Students have been demanding a zero fee increment and free education. 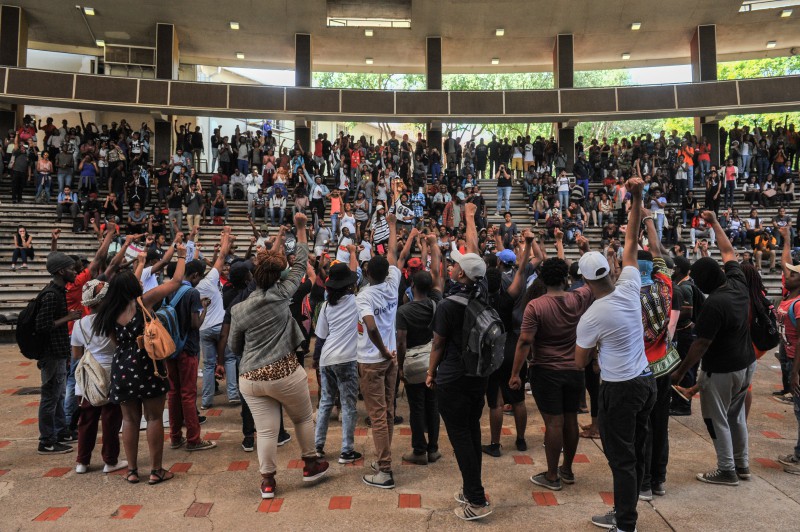 UP students sing and dance at the ampitheatre on campus, 21 September 2016, University of Pretoria Main Campus, Pretoria. Picture: Jacques Nelles

In the light of continuing protests by University of Pretoria students for free education, some students and their leaders have been issued with disciplinary and suspension notices from all UP campuses.

This comes after the university closed all campuses following unrest and protests at the Hatfield campus. Students were demanding a zero fee increment and free education.

According to the notice issued by the registrar, some students, including Economic Freedom Fighters Student Command (EFFSC) former leader Kabelo Mahlobogwane, contravened a high court order obtained in February this year.

Mahlobogwane mobilised the #AfrikaansMustFall protest in February in which students were demanding the university scrap Afrikaans as a medium of instruction. The successful protest led to the university announcing they would remove the language as of 2017.

The notice issued yesterday accused Mahlobogwane and others of participating and inciting violence, directly or indirectly intimidating, threatening, victimising, harassing, harming or interfering with staff and/or students at the Hatfield campus and disturbing academic proceedings.

Mahlobogwane was immediately suspended and instructed to vacate his room at the student residences with immediate effect.

“If you fail to comply with the terms of your temporary suspension and enter any university premises, (except as is made provision for herein or with the permission of the Registrar), such action will in itself constitute another violation of the university’s Disciplinary Code and Procedures,” the notice read.

UP spokesperson Anna-Retha Bouwer said while the institution respected the right to peaceful protests and constructive engagements, they could not allow unlawful disruptions.

“We cannot allow the disruption of classes, violent or unlawful behaviour and damage to property. Staff and students engaging in such activities will immediately be suspended.”

She said the process of issuing suspended notices was ongoing and could not confirm the number of affected students.

Mahlobogwane said he was not aware of the suspension.

“I shall wait to be served with the notice first and then entertain it accordingly after,” he told The Citizen.