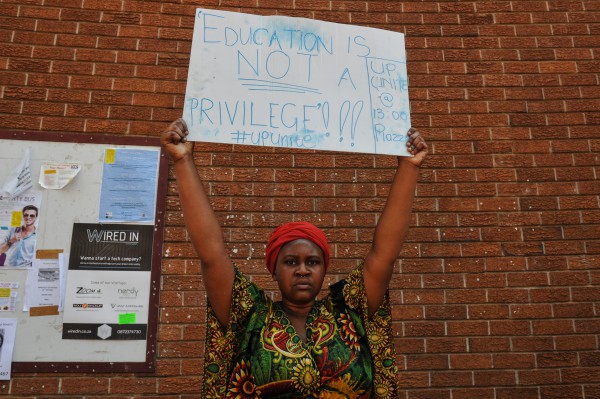 While the University of Pretoria shut down all campuses yesterday, Unisa’s national student representative council called on students to be “combat ready” after fee increments were announced by the institution.

He said students would eventually down tools during the day and “pick up in the evenings”.

“For now, we await [the] Unisa council to make a pronouncement on the zero increment we demanded, and in due course we will make a call to all Unisa students in the country to shut down every Unisa regional centre and [all] campuses,” he said.

The University of Pretoria shut its gates for a second day in a row this week, following continued protests.

Angry students gathered at the main campus’ amphitheatre to address issues and finalise a memorandum to be handed over to the vice-chancellor.

“The university seems threatened by this. They sent us an SMS stating if there is any violence, there will be immediate suspension. Some, not all, of the staff support you and this protest,” she said to the students.

UP spokesperson Anna-Retha Bouwer said it was unclear when the university would reopen.

“Details of the reopening of the campus will be communicated to all students, parents and staff on the website and social media platforms.”

Meanwhile, the Economic Freedom Fighters Student Command (EFFSC) and other student movements attempted to set fire to parts of Arcadia and the arts campus of Tshwane University of Technology (TUT) yesterday, the general secretary of student organisation Sasco on the campus, Gift Mashinini, said.

“The fire brigade managed to put out those fires. The EFFSC tried with the same approach at the main campus, but we were ready for them. No academic proceedings were interrupted,” he said.