Live report: Wits students march to the Chamber of Mines

'A student tried to jump over a wall, but he was pulled back and dragged by police. I saw students shot in the head and the arm,' said one student. 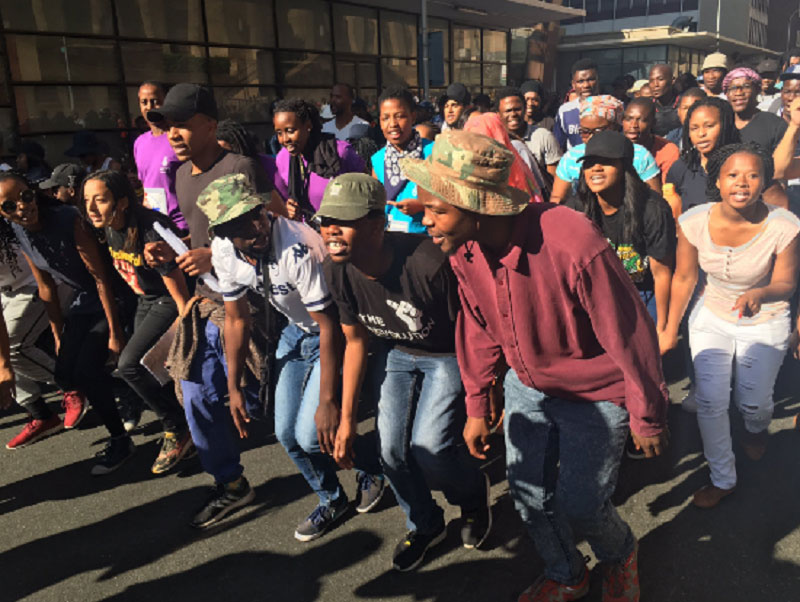 Students from the University of the Witwatersrand (Wits) on Wednesday marched to the offices of the Chamber of Mines of South Africa in Johannesburg as part of their #FeesMustFall campaign.

It is the second week of university students protests across the country.

Students have been protesting since Higher Education Minister Blade Nzimande’s announcement on Monday last week that state universities could decide fees hikes for next year on their own, provided they did not exceed eight percent.

Nzimande later said poor students and those with a household income of less than R600 000 a year would not be affected by the 2017 fee hike.

Initially on Wednesday, students aligned to different parties disagreed about the march to the Chamber of Mines, with some saying it served no purpose and was not strategic.

The SRC leader said students were marching to the Chamber of Mines offices in the CBD to deliver the memorandum, which said it was “now time” for the private sector to contribute and play a meaningful role in attaining free education.

Titled “Save Our Universities”, the memorandum highlights issues such as how the mining industry was the backbone of South Africa’s economy and the role it should be playing to ensure that the higher education system does not collapse.

“We call upon the Chamber of Mines to save our universities through increasing its contributions to the skills development levy, which has sat at one percent for the past 14 years,” read the memo in part.

“We call upon the Chamber to lobby government it increase its share of the contribution to the running of our universities to 50% of the cost. Infrastructure investment in higher education sector also needs to be increased.”

Protesting students said the #FeesMustFall movement was not just a “student issue”, but “a broad working class issue” since it was their parents who struggled to pay university fees.

Thandeka Mbhele, a cleaner at Wits main campus, on Wednesday said she was in support of the student’s struggles.

“These children are the ones that helped us get insourced. Us and the students are one at Wits,” Mbhele said.

At least 10 students were arrested at Rhodes University in Grahamstown on Wednesday as a protest over fees descended in chaos and violence.

Videos posted on the Oppidan Press twitter feed shows students being dragged and shot at by police officials.

“The university has been on a shutdown since last week. Management and students were having discussions which were going well up until yesterday [Tuesday] when they basically just said no to all of the demands,” she said.

Kidson said lectures were meant to resume on Wednesday, but some students disrupted classes in the law faculty. She said students blocked an intersection and pandemonium erupted when one threw a rock at a police vehicle.

“Police started shooting and students started running back on to campus, but even once students had run away, police continued to shoot over the hedge,” she claimed.

“A student tried to jump over a wall, but he was pulled back and dragged by police. I saw students shot in the head and the arm. People were bleeding,” Kidson said.

“Five of the students were arrested on charges relating to violating a court interdict, the other five students are being charged with malicious damage to property,” he said.

The Outsourced Workers together with student movements are now pleading with the nation to stop being silent while students and workers are “under attack from government and its capitalist masters”.

A handful of these supporters gathered at Church Square in Pretoria yesterday.

Vusi Mahlangu from the #OutsourcingMustFall movement (#OMF) said they, together with the #FeesMustFall and the #Occupy4FreeEducation Movement have realised that their goals and plight is the same and have now joined hands.

He said they are also calling on the civic movements, churches, workers, high school pupils and the public at large “to join the mass action and support the struggle for free education for all, full insourcing and the collapse of neo-liberal capitalism”. 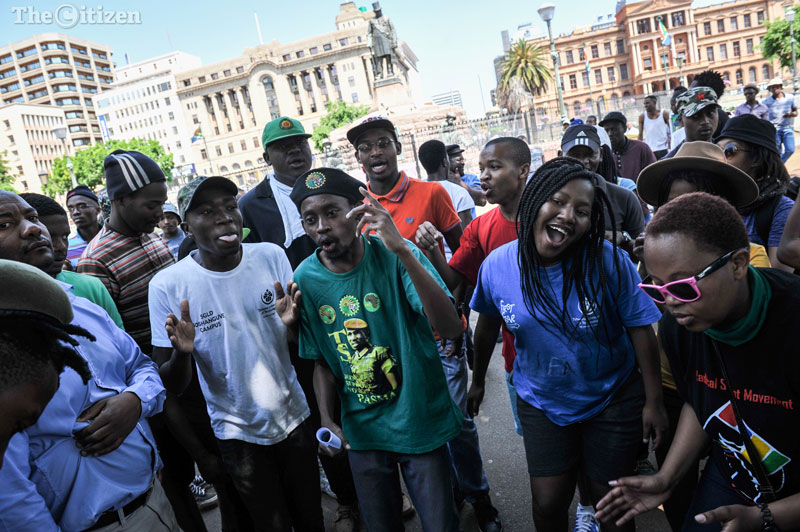 #Outsourcingmustfall, #feesmustfall and #occupy4freeeducation protestors gathered at Church Square in Pretoria, 28 September, to hold a press briefing regarding their stance on current protests. Picture: Jacques Nelles

“The protest shall continue and we will mobilise for the big mass action what we termed the National Day of Action,” Mahlangu said.

He also took  a moment and said their hearts and souls are with students  of this country that have been arrested at the University of Limpopo, Durban University of Technology and the University of KwaZulu-Natal  and those students who are currently in prison cells and those who are brutally attacked by private security and the police throughout the country.

Mahlangu said the outsourced workers are joining the on-going student protest, not only in solidarity, but also to submit a new set of workers’ demands following the betrayal of workers by university management. We are calling for insourcing of all workers now, R10 000 minimum wage and reinstatement of all dismissed workers.

They are rejecting Higher Education Minister Blade Nzimande’s announcement and said  he should resign together with his entire cabinet”.

“We condemn the continued attacks on students, the attempts by some universities to evict students from residents and we shall approach the lawyers for Human rights (LHR) to interdict all these attempts,” Mahlangu said.

Students from the Durban University of Technology (DUT) clashed with police for a second day in a row on Wednesday.

Police had to use teargas and rubber bullets to disperse stone-throwing students who converged at the Coastlands Hotel on Peter Mokaba Road, where an education stakeholders’ meeting was being held with senior university officials, student leaders and officials from the department of higher education and training.

Comment could not immediately be obtained from DUT spokesperson Alan Khan.

According to the university’s campus radio station Radio DUT, one student had been arrested, but this could not immediately be verified.

Students are protesting for the elimination of fees.

On Wednesday, during clashes between students and police, a student who was using a slingshot was arrested by police. The university was shut down on Tuesday and remained shut on Wednesday.

Wits University students in the Fees Must Fall movement were gathered at the Solomon Mahlangu Hall at the main Braamfontein campus, preparing to march to The Chamber of Mines offices.

A memorandum of demands was being finalised as hundreds of students gathered to discuss their plan of action and to wait for students from the Education campus and the medical schools. Students had organised buses for the masses of students expected to join the march.

Students at universities across the country have been taking part in massive protests against higher education fees, fee increments and student debt.

The spate of protests was sparked by Higher Education Minister Blade Nzimande’s announcement earlier this month, giving universities the prerogative to decide whether or not to increase fees for 2017, with a cap set to 8%.

Two clergymen from the Methodist Church of Southern Africa arrived at the hall to offer their support and to join the march. “It’s high time that we stop talking and start doing,” the bishop said.

The clergymen lamented the presence of the police on the premises, saying police were needed where people were being raped and killed everyday.

He added the church was concerned about the media coverage of the various protests. Earlier on, SRC members at the university met with academics briefly.

Meanwhile, down the road at the University of Johannesburg’s Kingsway Campus, journalists and students were reportedly pepper sprayed by security officers as students gathered to demonstrate at the campus.

Police presence was heavy at both institutions.

Running battles between students at the University of Limpopo’s Mankweng campus and the police have forced the university management to suspend lectures on Wednesday.

Students at the university returned from an academic recess on Monday and joined the #FeesMustFall campaign that has swept through the country’s institutions of higher learning.

In a notice to students, vice-chancellor Mashomanye Mokgalong said the decision to shut down the university was taken due to “protracted violent protests” on campus.

“The suspension is with immediate effect. All students are instructed to vacate residences by 5pm at the latest. The decision was taken in the interests of the safety and security our students, staff and university property,” Mokgalong said.

Three students were arrested and charged with public violence at the campus after skirmishes broke out between private security personnel and students on Tuesday night. Three other arrested students were released.

Violence broke out, and a student residence was reportedly torched during the fracas. Two students were injured after police used rubber bullets to disperse protesters that had gathered inside the campus.

University campuses have been rocked by protests since last year as students demanded free higher education.

An announcement by Higher Education Minister Blade Nzimande that fee increases for 2017 would be capped at eight percent brought a fresh wave of protests as students demanded a no-fee increase until government implemented free higher education.

On Tuesday Nzimande said damage to university property as a result of the unrest had reached at least R600 million.

Spokesperson Kgalema Mohuba said six students were initially arrested and three of them have since been released.

“The students returned from academic recess on Monday and started gatherings around the campus because protests had already ensued at other universities across the country,” Mohuba said.

“They held another gathering on Tuesday evening, and our security service provider tried to disperse them after realising that we were going to have a problem on our hands with them congregating at night on campus. They refused to move,  and rubber bullets were used to disperse them.”

Two students were injured by rubber bullets during the fracas.

Mohuba said students left the campus and a group of them attempted to break into a nearby shopping complex, but were stopped by police. There was no serious damage to property except overturned rubbish bins and rocks scattered at the campus, he said.

“We expected lectures to resume today at 7.30am, but no one is in class as we speak. Pockets of students have gathered around the campus, security and the police are keeping an eye on them.”

University campuses have been rocked by protests since last year as students demanded free higher education. An announcement by Higher Education Minister Blade Nzimande that fee increase for 2017 would be capped at eight percent brought another wave of protests, as students demanded a no-fee increase until government implemented free higher education.

On Tuesday, Nzimande said damage to university property as a result of the unrest had reached at least R600 million.