They have declared a war, so we will give it to them – Wits SRC president

As Wits plans to open its doors today, the SRC president vowed students in the #FeesMustFall movement would shut down the university again.

As Wits University plans to open its doors again today, following a two-week shutdown at the the hands of #FeesMustFall student activists, incoming SRC president Kefentse Mkhari said students in the movement would shut down the university again.

“These people want war; they have declared a war, so we will give it to them,” said Mkhari.

A mass meeting held by student leaders at the institution’s Solomon Mahlangu Hall yesterday saw hundreds of students deciding on a way forward for the week as university management held a meeting to decide whether it was safe to resume academic activity this week.

A controversial online poll conducted by the university last week Thursday saw 77% of the staff and students who took part in it (less than half of the student and staff body combined) voting to return to class.

But the university was considering various factors in its decision to reopen classes. “If they do agree to go ahead we will have additional security in place as well as police,” said Wits spokesperson Sharona Patel.

“We have had over 2 000 emails form staff, students and alumni who are saying they must go back to class. We will be looking at all factors such as security and the situation nationally.”

Other institutions affected by the nationwide student protests, such as the University of Cape Town, have also decided to reopen their doors today.

The Wits SRC complained last week that vice-chancellor Adam Habib refused to address the protesting students, speaking only through media, but Patel disputes this.

“He has been here this whole week and he has reached out to students. He has had one-on-one engagements with the various student leaders. We have written a formal letter to the Wits SRC to request a meeting with management; we are still waiting for a response on that.”

Despite the growing tension between the student bodies and management, Patel told The Citizen that the university was on the same page with the SRC in terms of the fight for access to education for the poor.

In the same breath, however, she said that the university was planning on beefing up security this week.

“We have no issue with people wanting to protest peacefully.”

Meanwhile Mkhari told The Citizen that plans were in place to rope in the public protector in a bid to put an end  to what they call excessive and expensive security measures at the university. 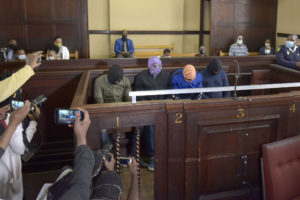