The new logo, featuring a Wonderboom tree, an aircraft and a runway, was redesigned in Tshwane municipality’s green, white and purple colours. 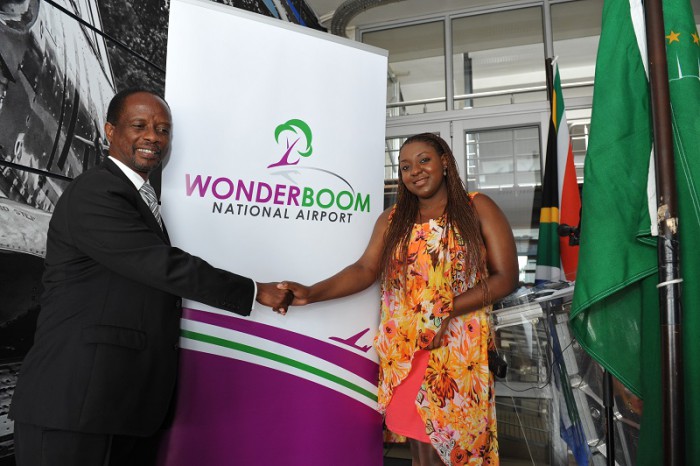 He said it also symbolised an important leap towards ensuring the airport was recognised as a major international tourist destination.

“Last year, the municipality embarked on a process to develop the Wonderboom Airport, including the reintroduction of scheduled daily flights to Cape Town,” Msimanga said. “October 4 sees the celebration of the first successful year of this partnership between the municipality and Airlink.”

The new logo, featuring a Wonderboom tree, an aircraft and a runway, was redesigned in Tshwane municipality’s green, white and purple colours. Mayoral committee member for roads and transport Sheila Lynn Senkubuge said the logo incorporated the 1 200-year-old Wonderboom tree situated in the Magaliesburg mountains in Pretoria. “It has the City of Tshwane colours,” Senkubuge said.

“The tree represents the airport, which makes it possible for people to connect with one another. The runway represents the link and shows the flight path of the aircraft.” She said her department wanted to market the historical background of the airport while increasing the use of flights.

“We want to increase marketing of this airport to the public and to ensure people are aware that flights are available, and those from the township can have access to these flights.”

In celebration of the link between the capital city and Cape Town, Msimanga announced the first capital-to-capital cycle tour, taking place in November. The cyclists will depart from the airport on November 2, and are expected to reach their destination at Cape Town International Airport on November 15.

Msimanga is expected to cycle part of the first leg to demonstrate his support. “The name of this event is Cycle Miles for Smiles, Capital-to-Capital. Cyclists will pedal for a purpose,” Msimanga said.

“They will create awareness for the birthday anniversary of the airport.”