The group was met by #FeesMustFall supporters, some of whom were white students who held up placards that said 'f*ck white people'. 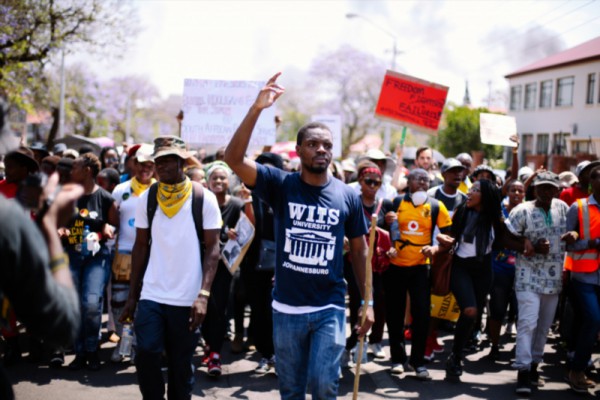 A small group of about 50 Wits university students protesting under the banner, #TakeWitsBack, marched to the Great Hall courtyard at the Braamfontein campus on Wednesday morning to demand that the academic programme be reopened.

This after the massive protests for free education led to a second shutdown this week following an agreement between university management and the students’ representative council.

Started by final year Law student Pixie Pillay, the movement said it was not against the #FeesMustFall movement but felt that their rights were being infringed upon.

The group was met with a group of #FeesMustFall supporters, some of whom were white students who held up placards that said ‘f*ck white people’.

The #FeesMustFall group said the counter protest to reopening the institution was undermining the cause for free education. “If they want to engage about opening free education they must come to our meetings. We want to open the university, but we can’t do that until we discuss free education,” said Mthwakazi Bula, a #FeesMustFall activist.

The #TakeWitsBack students said the main point of their protest was to let people know that they were there. A memorandum of demands was emailed to vice-chancellor Adam Habib.

Even though the Witswatersrand University (Wits) academic programme has been suspended again, students protesting for free education said they plan to meet on campus Wednesday at the Great Hall.

While university management has agreed to suspend the academic programme until Monday, the students said they would meet at the Great Hall, which they referred to as “Solomon Mahlangu House”.

After their meeting, the student said they would meet the mediators, who have so far brokered a truce after running battles between students and police on Tuesday when lectures resumed after more than two weeks of closure.

Although Wits management had insisted lectures would continue Wednesday the intervention of mediators – who include former Wits students – an agreement was reached late Tuesday to suspend the academic programme.

“Mediators and management will meet at 1pm to plan for Friday’s general assembly and iron out details of agreement,” Wits spokesperson Shirona Patel said.

Wits said it agreed to suspend the academic programme to avoid a repeat of the chaotic scenes on Tuesday in which police fire rubber bullets and used tear gas and stun grenades to disperse hundreds of protesting students who were trying to prevent those attending lectures from doing so.

At least three female students were seen topless as they pleaded with the police to stop shooting at them. Two arrested students were released after the intervention of Advocate Dali Mpofu, who is also the chairperson of the Economic Freedom Fighters party.

Patel said despite the academic programme being suspended until Monday, staff would be allowed to come in to work.

The protests started more than two weeks ago after Higher Education and Training Minister Blade Nzimande announced that state universities could hike next year’s fees, capped at eight percent.

President Jacob Zuma this week announced that the government will fund the R2.5 billion shortfall that will result from not increasing fees for students that cannot afford the hikes.

On Wednesday morning police stationed inside the the Wits campus were withdrawn.