Movement leaders plan to cease learning activity until ‘our demands are met’. 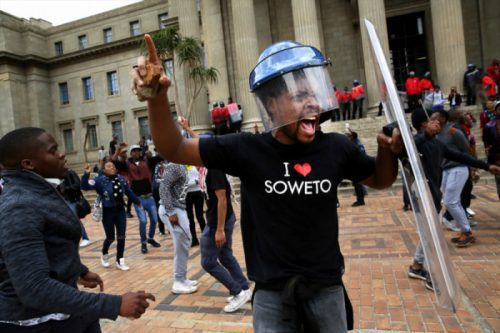 Wits University student leader Mcebo Dlamini, wearing what appears to be a security guard's helmet and holding a shield, confronts police with a rock in his hand outside during the #FeesMustFall protests on October 04, 2016 in Johannesburg. Picture: Gallo Images

Several universities intend to shut their doors today, as #FeesMustFall students rise in protest for free education in South Africa to be realised in their lifetime.

The planned national shutdown by students will bring academic activity to a halt, but the University of the Witwatersrand (Wits) in Johannesburg is determined to keep its operations going.

“The council of the university of the Witwatersrand agreed the institution would reopen [today], to ensure the continuation of its learning, teaching, research and administrative activities, along with the successful completion of each individual student’s academic year,” the university said at the weekend.

“This is for the benefit of all students – undergraduate and postgraduate, local and international, full-time and part-time and all the staff.

“We are committed to completing the 2016 academic programme and to ensuring that exams are written.”

But former Wits student representative council (SRC) leader Mcebo Dlamini said protesters would ensure the university was shut until “our demands are met”.

“We extended our hand to the university on the same day it decided to postpone the general assembly on Friday, to say let’s have discussions over the weekend. But it responded to the media, saying classes would resume on Monday,” Dlamini said.

“Our blood can spill on the university grounds. We are prepared to sacrifice our blood for the sake of a better future for many young people.”

He said a statement by Wits, in which it promised to disarm protesters carrying rocks, stones, or any weapons, was tantamount to draconian rules.

“This struggle for free education we are engaged in has now become like a street fight and, when you are involved in a street fight, you don’t ask your opponent not to hit you below the belt,” Dlamini said.

Students in Pretoria hoping to return to classes today would also spend another day at home, as the universities in the capital postponed reopening.

Following the national shutdown of at least 17 universities across the country, the University of Pretoria (UP) planned to host an engagement with staff and students today to address the call for free education.

“The aim of the engagements is to develop a shared university response to the national call for free quality education made by students,” UP spokesperson Anna-Retha Bouwer said. “The university will use the engagements to create a conducive environment for different views and perspective to be aired and heard.”