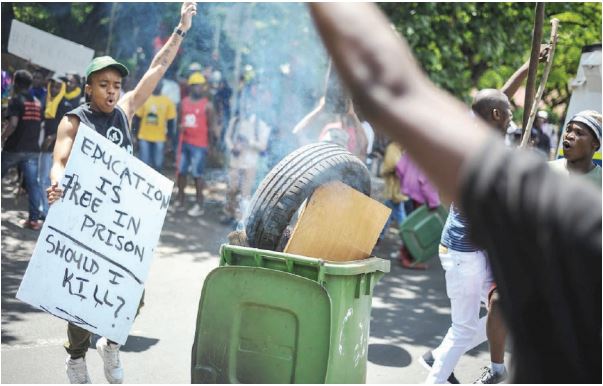 Tensions rose in Pretoria yesterday as rubber bullets were fired, causing chaos and leaving the city at a standstill.

Shops and businesses hurriedly shut their doors as intersections were barricaded with burning tyres and dustbins when a wave of protesting students marched through the CBD.

The #FeesMustFall protests took an ominous turn in Pretoria when hundreds of students marched from the main campus of the Tshwane University of Technology (TUT) after barricading the entrance with burning tyres ahead of the scheduled reopening.

Marching under police guard, students forced the closure of the Arts and Arcadia campuses, while burning tyres and bins in the busy streets of the CBD.

#Occupy4FreeEducation and #OutsourcingMustFall leader Vusi Mahlangu said their demand was for universities to support their call for free education.

Chaos and violence erupted when the protesters managed to break open the gate to the Tshwane North College, calling on the college students to join their march.

A police nyala sped through the throngs of students before officers fired rubber bullets. Students scattered, with some hiding in shops and private colleges.

Some students were arrested for public violence.

After regrouping, students peacefully marched to the Pretoria Central police station in a bid to secure the release of those arrested, but were met yet again by rubber bullets from the police.

TUT spokesperson Willa de Ruyter said despite the disruptions yesterday, activities at all campuses would continue today. “Security measures will be reinforced at all the university’s campuses.

Staff and students are reminded that they will only be able to access campuses with their TUT identification cards.”

Meanwhile, the University of Pretoria is continuing with academic activities online as an alternative means to on-campus learning as disruptions led to the failure of their scheduled reopening yesterday.

“The situation remains volatile and the university is making every effort to ensure that students can complete their studies in the remaining weeks of the academic year.

All lectures and study material will be made available either online, or by other means,” said spokesperson Anna-Retha Bouwer.