Kathrada asks ANC stalwarts and democratic citizens to back minister. 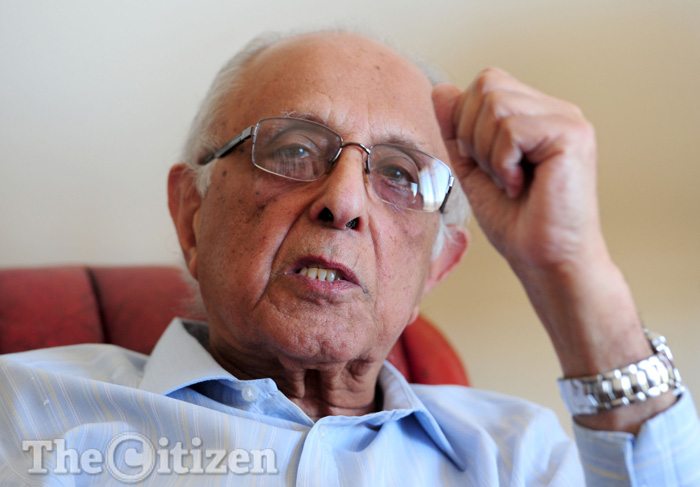 Struggle stalwart Ahmed Kathrada is rallying fellow veteran activists to show up to support Finance Minister Pravin Gordhan when he faces fraud charges in the Pretoria Regional Court next month.

In a statement yesterday, the Ahmed Kathrada Foundation quoted the Rivonia trialist as saying: “I will be there to accompany Pravin to court. I’m sure that I will be joined by other board members of the foundation, who include Derek Hanekom, Laloo Chiba, Max Sisulu, Kgalema Motlanthe, Barbara Hogan, Prema Naidoo and Sophie Williams-De Bruyn, amongst others.”

The foundation’s spokesperson, Zaakirah Vadi, said attendance by the other stalwarts would be subject to confirmation at a later stage.

Williams-De Bruyn did not confirm her attendance to The Citizen, saying only that she was “in contact with the foundation”.

The statement comes a day after National Director of Public Prosecutions (NDPP) Shaun Abrahams announced that Gordhan, Pillay and former Sars official Oupa Magashula would face fraud charges and had been summoned to appear in court on November 2.

Gordhan later called the move by the NDPP politically motivated, adding that Abrahams was being disingenuous in his handling of the matter. The foundation has called on all democratically minded South Africans to support Gordhan.

“We encourage South Africans to demonstrate their moral support for Gordhan, especially on November 2 at the Pretoria Regional Court, where he is expected to appear,” said the foundation’s director, Neeshan Balton.

The foundation challenged President Jacob Zuma not to remove Gordhan as finance minister following his show of support for the beleaguered minister yesterday.

“This commitment will, however, be tested by not removing the minister from his post, enabling him to deliver the budget statement and to continue with the work started in relation to building investor confidence in South Africa.

Anything different to this will make a mockery of any expression of confidence in the minister by the president and the ruling party of South Africa.”

Meanwhile, it has emerged that Gordhan hit out at Sars commissioner Tom Moyane in a parliamentary reply for failing to act on suspicious transactions in the bank accounts of now suspended Sars chief officer of business and individual tax Jonas Makwakwa and his partner, Kelly-Ann Elskie, linked to allegations of corruption and money laundering.

In a reply to DA MP David Maynier regarding the Sars investigation of the matter, Moyane replied that Elskie was on maternity leave and Sars was seeking legal advice on whether it was legal to suspend her, given her condition.

“Sars is currently in the process of seeking a legal opinion on whether an employer has lawful authority to suspend and/or institute disciplinary proceedings against an employee who is on maternity leave,“ a written reply said.

Gordhan, in his reply to questions about the allegations, blasted Moyane for not informing him when he became aware of them.

“It is perturbing that, considering the origins of these funds were not confirmed, Mr Moyane allowed Mr Makwakwa to remain in his position dealing with individual and corporate taxpayers.

It is my opinion that Mr Moyane failed to inform me of the matter, possibly in an attempt to resolve the issue without it becoming public,” he said.