Several bodies have called for the protection of protesters at tertiary institutions. 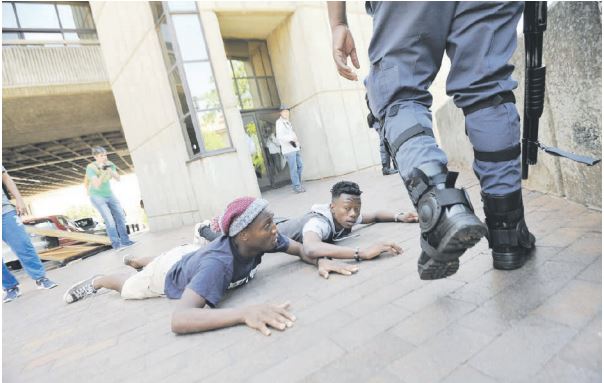 GROUNDED. Students were made to lie on the ground at the University of Witwatersrand, Johannesburg. A large police contingent was seen at the university throughout the day. Picture: Alaister Russell

The Fees Must Fall movement has caught the attention of human rights lobbyists who were concerned with the role of the police in the various violent altercations between students and security forces countrywide over the past month.

Sicel’mpilo Shange-Buthane, executive director for Amnesty International South Africa, has expressed his concern for what he called excessive force used on students by police and security detail at institutions of higher learning.

“The excessive use of force by the police and private security is alarming. Police heavy handedness should not be used to crush the call for free education,” he said. “Police should be working hard to ensure peaceful protests. Protesting students must also desist from using violence and destruction of property as a means to be heard by the authorities.”

Amnesty International was monitoring the protests as part of its human rights research. It intends to publish a report soon.

Echoing the call for calm during the protests was the South African Human Rights Commission, which is tabling a report to the Presidency on the transformation of universities in South Africa.

The commission as a constitutional body is vigilant about the realisation of the right to education in South Africa. “The Constitution protects this right, together with other basic rights. These rights include the right not to be subjected to violence by the state through bodies like the SAPS,” it said in a statement.

The commission pointed out sections of the Constitution which protect the rights of students and other stakeholders affected by the protest.

Also joining the call to protect the rights of students was EFF leader Julius Malema, during a scathing media briefing on Thursday about what he described as a country in collapse.

“The reality is the state has collapsed. We are on autopilot. The students are on the right path.” Malema said the party’s lawyers had been “bailing [out] the [arrested] students, telling them “to go back to the picket lines”.

Eswatini nurses shot during protests: union
4 days ago
4 days ago

Eswatini nurses shot during protests: union
4 days ago
4 days ago