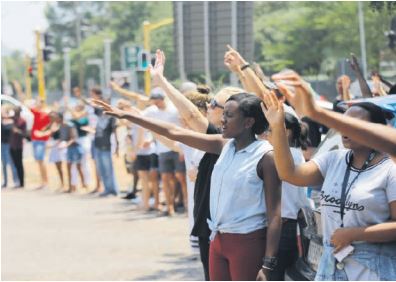 REACHING OUT. University of Pretoria students gather for a mass prayer meeting after clashes at the university at the beginning of the year. Picture: EPA

A group of concerned academics and staff at the University of Pretoria (UP) claim the institution has a deeply rooted culture of racism and that the majority of students, who happen to be black, are still seen as “the swart gevaar”.

The group have declared their full support for the protesting #FeesMustFall student movement and also emphasised that free quality, decolonised education was not the only problem.

The group, which has approached The Citizen and requested their identities be withheld for fear of losing their jobs or being victimised by management, claimed UP and the #FeesMustFall movement had reached a stalemate due to “the reluctance” of vice-chancellor professor Cheryl de la Rey and management to engage with them in an open assembly.

The group cited the following as their major concerns:

UP has announced a complete shutdown and instituted classes via the internet, but has failed to address access for the vast majority of students, the academics have claimed.

They say the fact that UP has experienced the least violence compared with other universities should have inspired management to engage with students.

“Destruction costs at UP since the first protest last year are calculated at R30 000 compared with millions of rands in other institutions,” an academic said. “One dangerous thing we must remember is that these students are looking at their peers at other institutions. “If we delay talks with them, they might resort to what is happening at Wits.”

According to another academic, speaking for the group, the vice-chancellor “has shown the students nothing but silence, dislike and disrespect”.

When De la Rey accepted a memorandum from students, she came out surrounded by a group of riot security policemen. “This was offensive, not only to the students, but to some academics. It was very disturbing because it calls up all kinds of images and discourses from our past.”

According to one academic, students expect the vice-chancellor to listen to their complaints and intercede with government.

“The university’s complicity with the apartheid state is historically well documented and in that one regard, UP has been very slow to transform. “While there is transformation in the numbers of students, the numbers of academics have pretty much remained the same.

“Black academics are still very much a minority, especially at UP, and that is why when decisions are taken at university level and management says there is staff consensus, one has to question how that staff consensus is reached.”

The issue of security was of grave concern and the academics have claimed security guards are Congolese and Nigerian mercenaries. “The university has put these mercenaries up against defenceless students.

Female students have complained that these men are groping them inappropriately. The vice-chancellor has done nothing about it so far.”