‘No TUT aid’ for wounded student

The 25-year-old student said he walked back to his room and found 'a bullet cartridge' in his pants. 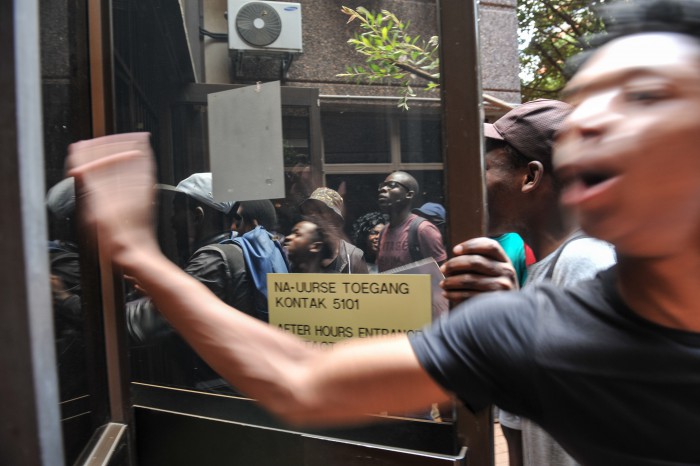 A Tshwane University of Technology (TUT) student who was allegedly shot and wounded by a security official at the Pretoria main campus was apparently left to limp from hospital back to his residence as the university “did not provide any assistance”.

Sanele Mathebula, 25, was shot in the ankle and buttocks last Thursday as protests for free education continued at TUT’s main campus. Mathebula, however, says he was just a spectator.

While squatting and watching the protests from behind the gates of residence Lezard, Mathebula claimed a security official aimed a gun at him and fired a shot.

“I felt my pants were wet. I walked to my room and found a bullet cartridge in my pants. I realised I was shot. The bullet went from my ankle to my buttocks,” he said.

Limping back to the security official who allegedly shot him, Mathebula said the guard explained that he was not aware the gun was loaded with live ammunition. He said his friends helped him call an ambulance.

“I was taken to Pretoria West Hospital and was admitted at 2pm. Someone from TUT management contacted me and said I should inform him when I was discharged. I was discharged that night at 10pm but no one from TUT could help me get back to campus. At about 3am on Friday, my friends came across some police officers outside who gave us a lift back to our residence,” said Mathebula.

“The following day my friends helped me to go back to the hospital for wound care. I contacted TUT management, telling them  I had no transport, but they couldn’t help me. I walked back to campus,” Mathebula said.

Mathebula, who is doing his first year in tourism management, said his studies were funded by the National Student Financial Aid Scheme.

“I lost both my parents in 2000 and I live with my grandmother and sister in KZN. They both don’t work. My friends were the ones that helped me pay for my medical bills. TUT, the security company and the security guard did not help me with anything,” he said TUT continued with their academic activities yesterday despite disruptions by protesting students at the Ga-Rankuwa campus.

ALSO READ: What the ANC taught us, according to Ntsiki Mazwai

Mathebula, who walks around in pain, attended class yesterday.

“I went to class because classes resumed. It’s hard concentrating in class as everyone stares at me and I struggle to sit due to the wound.”

TUT spokesperson Willa de Ruyter said she could not yet comment on the matter.