Dead girlfriend’s twin tells court he said he’d kill her ‘like he killed her sister’. 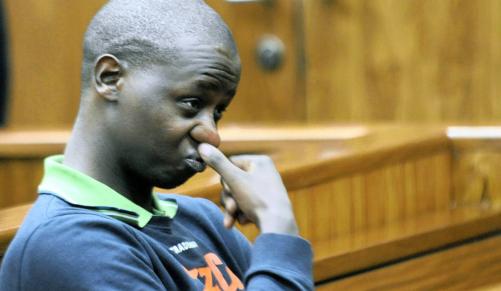 Patrick Wisani, the ANC Youth League official accused of beating to death his girlfriend, Nosipho Mandleleni, last year, hit a few walls when he tried to challenge the credibility of the evidence against him yesterday during his murder trial.

Defending himself, despite several warnings against doing so, Wisani cross-examined a police photographer who said he found bloodied clothes hidden in Wisani’s bedroom closet and two weapons, a sjambok and a broomstick.

Constable Sibusiso Shongwe was asked by prosecutor Faghre Mohamed to explain in detail exactly how he had conducted his work and collected exhibit items from Wisani’s bedroom.

Wisani’s cross-examination of Shongwe, in which he raised an apparent discrepancy in how the forensic evidence was labelled, was interrupted by Judge Mohamed Ismail who explained to Wisani that he was reading from someone else’s statement.

The doctor who examined the injuries of Nosipho’s twin sister Siphokazi Mandleleni and her friend, Wisani’s ex-girlfriend Zimbini Mathibe, also took the stand. Wisani allegedly assaulted them outside a club in Hillbrow.

Earlier this week, Wisani asked Siphokazi during cross-examination why she and Mathibe had waited a day for a doctor’s examination so they could lay the assault charges. She said she could not find a doctor nearby.

Wisani, who allegedly threatened to kill Siphokazi during the assault, had also confessed to the crime, according to his deceased girlfriend’s twin, when he said he would kill her “like he killed her sister”.