He also insisted that the credibility of the public prosecutions body has not been eroded at all. 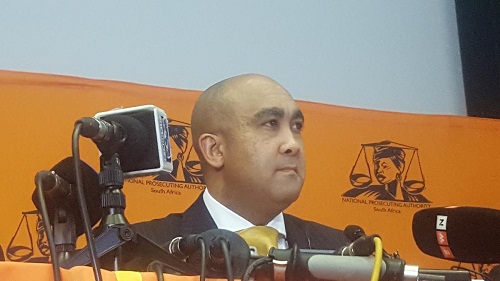 National Director of Public Prosecutions (NDPP) Advocate Shaun Abrahams says he has no intention of stepping down from his post as the country’s chief prosecutor following his decision on Monday morning to immediately withdraw fraud charges against Finance Minister Pravin Gordhan and two former SA revenue service officials.

Speaking at an impromptu media briefing in Pretoria, Abrahams received a barrage of questions from journalists asking whether he would take the fall for the botched prosecution.

“Will I resign? Certainly not, certainly not,” he said defiantly, stating that he didn’t make the call to charge the trio but merely took a decision to review the charges.

A 2009 memo from a Sars legal executive which stated there was no technical reason why Pillay could not retire early and be reappointed as a consultant formed the basis of Abrahams’ decision to withdraw the charges and summons.

Abrahams said he doesn’t owe anyone an apology for retracting the charges and he treated the case like any other case.

He also insisted that the credibility of the NPA had not been eroded at all.

The NDPP was at pains to explain the decision for the indictment without solid evidence saying he could have released a statement announcing the withdrawal of the charges, but he wanted to take the public into his confidence.

Asked if he was embarrassed or disappointed, he refused to answer the question saying he is “upbeat” about the integrity of the NPA although also admitted that the case was a huge  “blunder” for the NAP.

He said he hoped today’s decision would instil public confidence in the prosecutions body.