The federation’s president, Sdumo Dlamini, said they would not fight parties' battles. 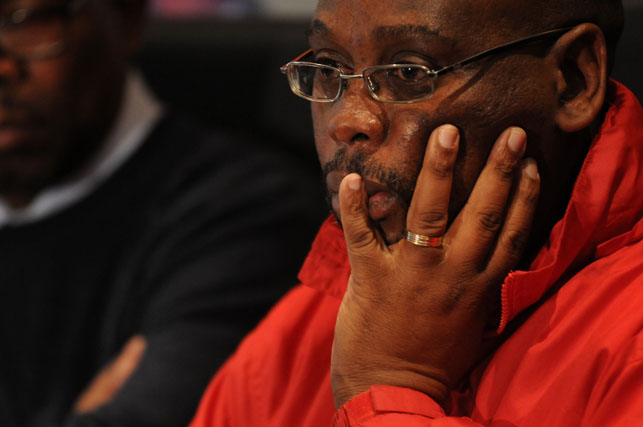 The federation’s president, Sdumo Dlamini, was responding to remarks by Nzimande at the party’s Red October campaign launch yesterday, where he challenged Cosatu to mobilise and fight state capture, following former Public Protector Thuli Madonsela’s report on the influence of the Gupta family over government institutions and officials.

“No one is better positioned to stop the state capture than the trade unions. The biggest loser, if we allow our state to be stolen, will be the working class,” Nzimande said, before calling on Cosatu to mobilise.

“We want to Cosatu to launch a section 77 notice (so we can take to the streets) to fight, to launch a campaign against the corporate capture of the state. Cosatu and its affiliates must in this instance lead us to say South Africa is not for sale. Our country is not for sale.”

But Dlamini did not agree that it was Cosatu’s battle to fight. Instead, he accused politicians of trying to use the federation to fight political squabbles.

“They want to use Cosatu for their own political agendas, when we are occupied with rebuilding unions.”

Asked if the federation was making a concerted effort to stay away from political squabbles in favour of focusing on union strengthening, Dlamini said: “That is correct. We are doing that.

“I know it irks other people who want to hear Cosatu making noise about the political discourse in the country, while we are tasked with the responsibility of strengthening and rebuilding unions.”

Dlamini said that the capture of the state by corrupt forces was not something new.

“As workers we have been fighting a vicious system that has been captured for many years back since the apartheid era. They have been influencing laws that are affecting workers.

“They are against a national minimum wage and comprehensive social security, they are using pension funds of workers investing them wherever they want without workers having a say. That is called state capture.”

Commenting on Nzimande’s remarks that the union federation was weakening, Dlamini retorted: “We are admitting that we are weak. We don’t deny that. But so is everybody else [in the alliance].

“So is the ANC. So is the SACP. So is Sanco. All the progressive forces are on the back foot. What is critical for them is not necessarily pointing fingers at each other, but to stand together.”

Dlamini said that there was a tripartite alliance summit in the pipeline for early next year, to deal with issues hurting its members.