EFF ‘fraud trio’ to spend the weekend in jail

The trio, all TUT students, allegedly tried to extort R100k from the university’s contracted security company. 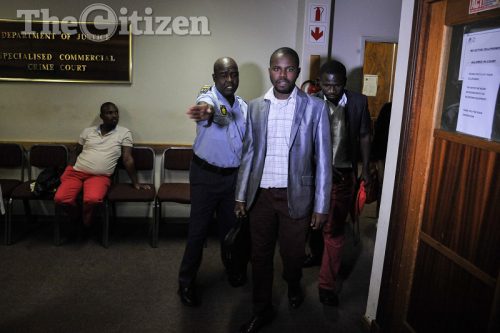 One of the accused TUT students that briefly appeared on charges of corruption at the Department of Justice, Specialised Commercial Crime Court, 17 November 2016, Pretoria. Picture: Jacques Nelles

Three Tshwane University of Technology (TUT) students will be spending the weekend at the Kgosi Mampuru II prison after their matter was remanded to Monday, following a brief court appearance yesterday.

Emmanuel Ramalata, 25, Mpho Kekana, 30, and Thanzielo Nematshema, 25, were charged with corruption at the Pretoria Specialised Commercial Crime Court after the Hawks arrested them earlier this week.

The trio allegedly tried to extort R100 000 from the university’s contracted security company. Nematshema, the TUT’s current Economic Freedom Fighters Student Command (EFFSC) chairperson, and his co-accused, who are members of the EFFSC, were arrested on Tuesday, following the Hawks’ investigation.

State prosecutor Peter Seronye requested the matter be remanded to Monday as they needed time to verify information and for the defence to apply for bail.

Defence attorney advocate Matome Seima told the media he had not yet been presented with the docket or formal allegations.

“My instructions are to apply for formal bail for my three clients and we will take it from there.

“I cannot comment on the merits of the case as I haven’t been furnished with the dockets and allegations formally.”

About 30 TUT students squeezed into the small courtroom in support of the accused students. EFFSC deputy chairperson Javis Valoyi said they would be scrutinising the matter to determine the exact details of what had happened.

“We came to show support to our fellow students as they are innocent before the court until proven guilty. “As the EFFSC, we are going to do thorough investigations and combine that with the court’s verdict before we can find a way forward.”

Hawks spokesperson Brigadier Hangwani Mulaudzi said the accused trio had approached the security company owner in an attempt to solicit R100 000 in exchange of extending their contract with the university.

“The national anticorruption investigation unit and crime intelligence got hold of the information and an undercover operation was instituted,” Mulaudzi said, claiming the students were arrested on Tuesday by the Hawks after allegedly extorting R40 000.

“These people do not have the authority to guarantee the awarding or extension of contracts. No individual within the university has the authority to award contracts without proper scrutiny and following the proper procedures.”