The party’s stalwart said the objective of the consultation would be to put the ANC ‘back together’. 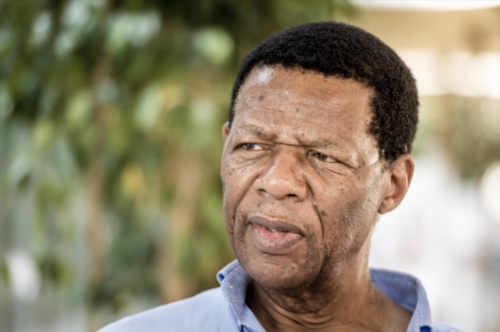 uMkonto We Sizwe veteran Mavuso Msimang poses for pictures during an interview on 05 April 2016 in Johannesburg. Msimang is amongst some of South Africa's liberating heroes who are providing strong condemnation and opposition to the ANC. (Photo by Gallo Images / Rapport / Cornel Van Heerden)

The African National Congress (ANC) could convene a consultative conference as early as December, although restoring the ruling party to its former glory would take time, says ANC veteran Mavuso Msimang.

Speaking to Talk Radio 702 on Tuesday morning, Msimang said the party’s 101 veterans who met with the ANC’s national working committee led by President Jacob Zuma on Monday in Pretoria had agreed to consult as many people as possible regarding the state of the organisation, hence the call for a consultative conference.

“I have said and will say, it was an extremely difficult meeting, as would have been expected … All veterans, whatever their pedigree, informing an elected leadership that a consultative conference was necessary and should be convened to resolve the crisis, the deep crisis in the ANC,” he said.

The former director-general of home affairs said Zuma insisted on the meeting being held next month.

“I don’t think you would have expected people to say, wonderful, you’re right about that. So it was a difficult meeting, I am nevertheless heartened by the fact that we met and engaged, and we agreed that we should continue. Actually President Zuma wanted this thing to happen as soon as possible. He kept on saying before December because time is going, so there is an eagerness to engage.”

Msimang, who’s been a vocal critic of Zuma’s leadership and has previously called for his resignation to save the liberation party from electoral decline, said he didn’t think by December the ANC’s challenges around corruption and factionalism would be resolved ahead of the conference taking place.

“You don’t engage in these things unless you have expectations, and I believe that things can change. I think it would be naive to think that by December things will be hunky-dory, no. They will absolutely not.

“I think the important thing; the objective of this meeting was, let’s get a credible group of people together with the NEC [national executive committee] to sit down and call in all stakeholders. In my view, even non-ANC people, because the ANC … has been a leader of society.”

The struggle stalwart said such a meeting would need to have a “clear agenda” that would include discussions around how new leadership was elected ahead of the party’s national elective conference in December 2017.

Following the Constitutional Court’s seminal judgment in March, which found that Zuma had flouted his oath of office as the country’s head of state surrounding controversial nonsecurity upgrades to his private KwaZulu-Natal home, Msimang stood by civil society organisations that had called for mass action after Zuma’s refusal to step down despite the damning ruling.

He said the mood between himself and Zuma at yesterday’s meeting wasn’t tense.

“I attended that meeting as part of the 101 [veterans]; in my personal capacity I have said things which I will repeat about what I think the president should do, but I want to talk here strictly as a member of a large group with slightly diverse views but agreeing on one key thing: to put the organisation back together.

“We need to consult as many people as possible, that is why there is a call for a consultative conference. You will be surprised … he [Zuma] smiled with me. We exchanged greetings after the meeting, so it’s fine,” he said.

'It's an assumption': Duarte clarifies ANC's claims of sabotage at Eskom
5 hours ago
5 hours ago
PREMIUM!

'It's an assumption': Duarte clarifies ANC's claims of sabotage at Eskom
5 hours ago
5 hours ago
PREMIUM!