The veteran journalist has finally written about his frustrations at being invited to interview a Gupta. 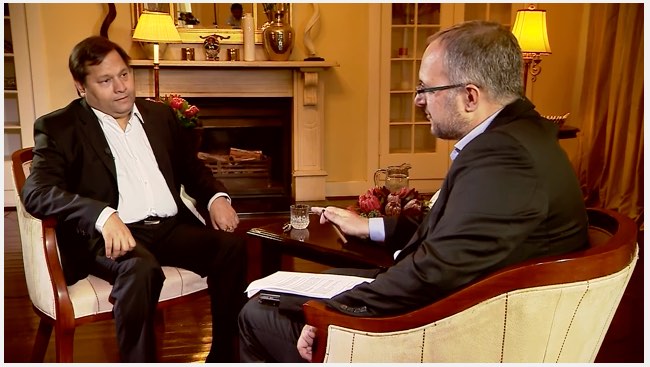 In an article that appeared on Daily Maverick on Monday, veteran journalist Stephen Grootes discussed his experience of being invited to have an exclusive interview with the eldest and most influential member of the Gupta family, Ajay.

He writes about how he was sent a mail by the “now famous” London-based public relations firm Bell-Pottinger asking him to sign a non-disclosure agreement (NDA) before he would be allowed to know which famous person he’d have the opportunity to interview.

He signed it and it turned out that person was Ajay Gupta.

Grootes was told he’d have the opportunity to interview Gupta for an hour at his Saxonwold home, but Bell-Pottinger would record and edit the video of the session before it could be released.

Grootes says he took along his own recording device as backup in the event that the edited version would have to be disputed. He also says that he informed the PR company and Ajay Gupta that he would be doing this, and that Bell-Pottinger could hold on to his recording until the interview was released.

He claims that what ensued was months of frustration, and they, “or the people they hired through Bell-Pottinger, still have my machine, and have simply not responded to my attempts to get it back”.

Grootes claims that it had been obvious to him throughout the interview that Gupta was lying when posed difficult questions about ministers Des van Rooyen and Mosebenzi Zwane.

Since he had signed the NDA, he was not able to say anything about his meeting.

“A week passed, each day starting out with the hope that today I could broadcast the interview, and every day ending as the previous twenty-four hours. Eventually, I emailed [Bell-Pottinger], and said that I would like my recording device back. I was promised that it would be returned. I’m still waiting.”

In perhaps his most damning comment on the matter, he writes: “I knew at the time that the Guptas were of dubious morality. I did not expect them to be outright thieves.”

He has broken his silence on the matter since the YouTube recording below of his Gupta interview was somehow leaked on Sunday with the accompanying text: “Bell Pottinger’s Victoria Naylor Leyland attempt at producing a video to improve the Gupta family’s image in South Africa. This video was never been released as clearly Mr Gupta still needs some media training and coaching from Bell Potinger’s quintessential dark arts.”

“Now, thankfully, it is in out in the public domain,” writes Grootes. “The interview we recorded was over an hour. Just over twenty-three minutes has been published on YouTube. And it is massively out of date. But it is still valuable in that it shows us how Ajay Gupta, under pressure, does not tell the truth. And it shows us how Bell-Pottinger really operate.”