The students faced charges of public violence for torching and pelting buses with stones throughout Sunday night. 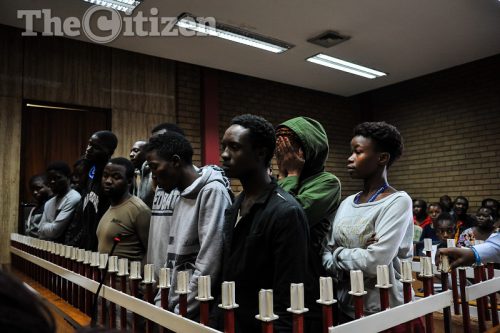 Some of the 20 TUT students that were arrested on Monday is seen inside court in Soshanguve, 23 November 2016, Tshwane. Picture: Jacques Nelles

Twenty students squeezed next to each other in the dock when they were granted bail on Wednesday for their involvement in the chaotic commencement of exams at the Tshwane University of Technology (TUT).

The group, arrested in the streets of Soshanguve about 4am on Monday morning, made their first appearance at the Soshanguve Magistrate’s Court.

They faced charges of public violence for torching and pelting buses with stones throughout Sunday night.

The students were demanding that exams be postponed to next year, claiming they were not prepared due to the recent #FeesMustFall unrests.

“You cannot be detained from Monday to Wednesday with no investigations,” Luus said.

“The university is only a few blocks from here and this information should have been obtained.”

Luus then said the students should not have been “running around the streets if you were serious about exams”.

The exams were successfully conducted in Tshwane this week, with Soshanguve students transported under police guard to the Tshwane Events Centre.

According to TUT spokesperson Willa de Ruyter, the institution received praise from stakeholders for carrying out its final exams.

“The decision was taken to allow our students the opportunity to complete this academic year.”