Transnet is allegedly paying students R407 per week, less than half of the stipulated stipend. 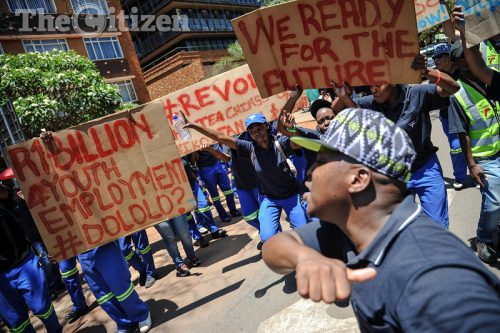 A group of Transnet apprentices are claiming the department of public enterprises contravened the Skills Development Act of 1998 by paying them less than half the stipulated stipend while offering poor quality training.

The apprentices gathered outside the department in Pretoria on Tuesday demanding to see Minister Lynne Brown. They said it was the fourth time they had come to see her about the issue.

According to the Government Gazette of April 4, 2014, the weekly minimum stipend for learnerships and apprenticeships was R1 130.40 for first-year students, but Transnet apprentices earned R407 per week.

“The students are hereby demanding that they be reimbursed what is owed to them from the first day they arrived as trainees at Transnet and for the stipend to be increased to the standards of the Government Gazette immediately,” said student representative Simon Rametse.

He said artisan apprenticeship at the Transnet School of Engineering was not up to standard as about 50 students had to man one machine, exposing them to danger and affording them little opportunity to learn. He claimed the tutors could not cope with the workload as three tutors were assigned to teach a class of 100 students, instead of one tutor per 20 students.

Rametse said the department had also informed them they would not be permanently employed in state-owned companies as promised. “We were told it’s a financial deficit and the economy is growing at a rate of 0.5% so they can’t employ us. They want us to go into entrepreneurship instead.”

The students, who are all enrolled for a three-year programme at Transnet School of Engineering, said it was their fourth march to the department to hand over the same memorandum.

Although their march was approved and expected by the department, the minister was not present when they arrived. The department and Transnet did not comment.