The walk will also pass through iconic heritage sites such as the Palace of Justice at Church Square. 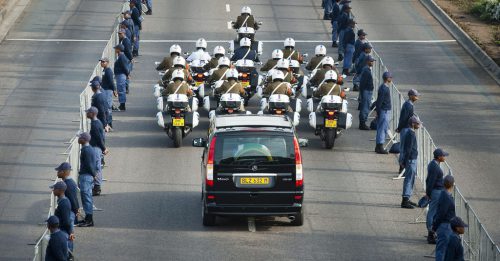 Nelson Mandela's procession under way to the Union Buildings on December 11, 2013 in Pretoria, South Africa. Former South African president, Nelson Mandela, passed away on the evening of December 5, 2013. From December 11 to 13, 2013, he will lie in State for public viewing. His State funeral will take place on December 15, 2013, at his homestead in Qunu. (Photo by Gallo Images / Foto24 / Lisa Hnatowicz)

In commemoration of former president Nelson Mandela, the third annual Mandela Remembrance Walk will take place next Sunday in Tshwane to celebrate the political icon’s legacy.

Held with the theme “Mandela’s Legacy Lives On”, the 5.3km walk aims to promote unity between South Africans and to remember the values instilled by the former leader.

Only 15 000 people will be allowed to register for the walk from the Union Buildings to the Kgosi Mampuru ll Correctional Service Centre, led by the Gauteng department of sport, arts, culture and recreation.

The route is set to retrace Madiba’s last journey in Tshwane when his remains were transported from 1 Military Hospital to lie in state at the Union Buildings in 2013.

At the time, thousands of people descended upon the capital city and formed long queues, reflecting the historical 1994 elections when the masses elected Mandela as the first president of a democratic South Africa, said Nomazwe Ntlokwana, the sport, arts, culture and recreation department’s spokesperson.

The route also passes some iconic heritage sites, including the Palace of Justice at Church Square and the Women’s Living Monument.

“This year’s event has raised interest among many who want to use the walk to invoke the spirit of Mandela to help guide the country to a brighter future,” Ntlokwana, said.

“Hundreds of young people are expected to showcase their physical fitness and readiness to take the Mandela legacy forward.”

She said registration for the walk was still open but fast reaching the limit.

Involved in the walk are Gauteng government, the City of Tshwane, the Nelson Mandela Foundation and the South Africa Unity Rising campaign.

Park-and-ride facilities will be available free of charge between Jopie Fourie Primary School, next to Kgosi Mampuru, and at Pilditch Stadium in Pretoria West.