Maguvhe accused the ad hoc committee of violating his rights as set out in the UN Convention on the rights of persons with disabilities. 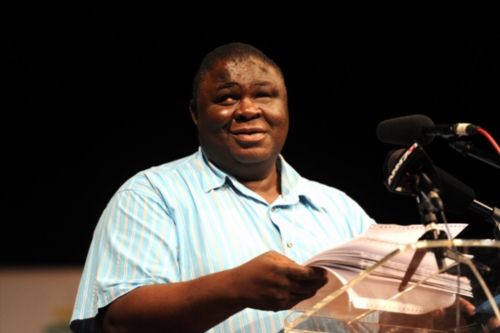 JOHANNESBURG, SOUTH AFRICA - OCTOBER 06: SABC board member Mbulaheni Maguvhe speaks during a media conference on October 06, 2016 in Johannesburg, South Africa. The remaining members of the SABC board said they were not going anywhere despite calls to dissolve the board following the resignation of its two members in Parliament on Wednesday. (Photo by Gallo Images / Beeld / Felix Dlangamandla)

Defiant SABC board chairperson Professor Mbulaheni Maguvhe, the sole remaining board member of the beleaguered public broadcaster, on Wednesday said he felt “bullied, belittled and disrespected” by MPs investigating the board’s fitness to hold office.

Briefing the media in Cape Town, hours after a delegation of SABC executives walked out during the parliamentary ad hoc committee, Maguvhe accused MPs of violating his constitutional rights, and being negative and hostile towards him.

The representatives, led by the chairperson, which included acting SABC CEO James Aguma and chief executive of corporate affairs Hlaudi Motsoeneng, staged the walkout after Maguvhe demanded that all documents to be considered by the ad hoc committee, should be converted to Braille because he is partially blind.

However, the committee’s chairperson, Vincent Smith, rejected the request, saying the committee had been notified by SABC secretary Theresa Geldenhuys that Maguvhe would convert the documents to Braille himself before appearing in parliament.

Maguvhe has accused the committee of violating his rights as set out in the UN Convention on the rights of persons with disabilities by refusing to convert the documents to Braille. He also said his rights to legal representation and to cross-examine witnesses had been denied by Smith.

He said the committee should have made the documents available and accessible in a format he wanted, adding that Braille documents were heavy.

“Does this committee expect me to carry bags and bags of [Braille] documents?” he asked.

Maguvhe claimed that the utterances by MPs in the special parliamentary committee indicated the probe was a done deal, saying its processes were unfair and it didn’t make sense for him to subject himself to an inquiry that has already made up its mind.

Earlier on Wednesday afternoon, the office of ANC chief whip Jackson Mthembu issued a scathing statement following the walkout. It said the walkout and “irrational” request by Maguvhe and other SABC representatives were “the latest in a series of stalling tricks aimed at frustrating the work of the ad hoc committee”.

Mthembu’s office also said it was “dismayed and shocked by the disrespectful and contemptuous” conduct of the SABC representatives.

Leave Aarto to parly, says government
7 days ago
7 days ago

Leave Aarto to parly, says government
7 days ago
7 days ago