Nehawu to lobby for Ramaphosa, wants Zuma out 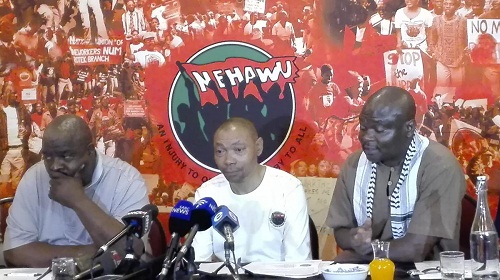 The National Education Health and Allied Workers Union (Nehawu) has repeated its call for Jacob Zuma to step down from office as the country’s president, saying while it noted the African National Congress’ (ANC) recent decision not to recall Zuma, it will lobby Cosatu to take the same stance regarding his continued stay in power.

Briefing the media in Braamfontein, Johannesburg, on Thursday following a meeting of its central executive committee (CEC), Nehawu general secretary Bereng Soke called on Zuma to be courageous and honourable.

“The CEC as the highest structure between congresses reaffirms the union’s call on comrade Jacob Zuma to take the honourable and courageous decision in the interest of the ANC and our people by resigning as president of South Africa.

“We didn’t call for a vote of no confidence in the president … our message has been directed to the president that he resign as state president,” Soke said.

Cosatu, the ANC’s biggest alliance partner, last month formally endorsed Deputy President Cyril Ramaphosa as the governing party’s next leader. The trade union federation said it would not call for Zuma to resign publicly but rather to discuss the issue with the party internally.

The ANC said at the time that Cosatu had jumped the gun and asked its alliance partners and leagues to desist from speaking about the succession debate.

Nehawu said Ramaphosa should immediately take over and lead the party and unite it ahead of its hotly contested leadership race set to come to a head during its 54th national elective conference in December 2017.

“We maintain that the best way forward is for the ANC leadership to develop a unifying roadmap towards the 54th national conference and with comrade Cyril Ramaphosa steering the transition to an overwhelming victory in the 2019 general elections,” said secretary Bereng Soke.

Nehawu deputy secretary Zola Saphetha accused Zuma of keeping silent while the ANC is disintegrating under his watch.

“We expect the president to stand up as a leader and say this is too much … this has to stop. We expect him to say not in my name, but his silence says a lot,” Saphetha said. Adding: “We think that when difficulties arise, a leader needs to rise to the occasion. Many wrong things are happening within the movement but are ignored … the movement is disintegrating under the president’s watch.”

Nehawu is Cosatu’s biggest affiliate and one of the first groups within the tripartite alliance comprising of the ANC, Cosatu and the South African Communist Party (SACP) to publicly call on Zuma to resign.

The union was once upon a time a staunch supporter of Zuma.